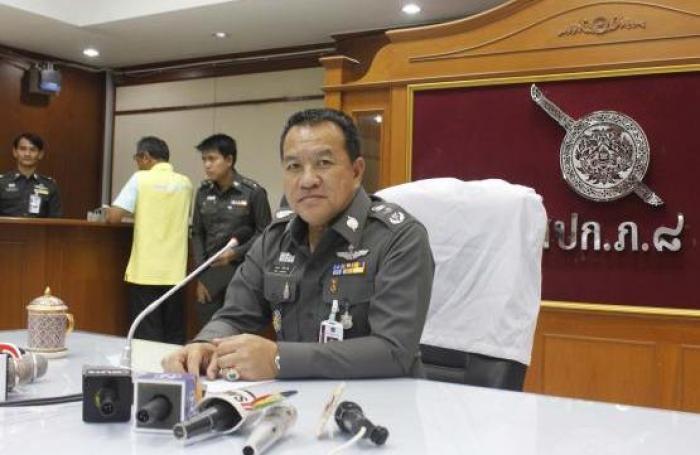 PHUKET: Supervisors of the former chief investigator probing a high-profile human-trafficking case reacted angrily on Friday to his accusation that he received no protection from them despite facing death threats.

Maj Gen Paween Pongsirin quit the police force last month and is now seeking political asylum in Australia. He told Australian media that he feared for his life because influential figures in the military and police implicated in the illicit trade wanted him dead (story here).

National Police Chief Gen Chakthip Chaijinda said that he suspected Gen Paween’s comments might be politically motivated and that they were intended to damage Thailand’s reputation.

“I have ordered the legal team to look into Gen Paween’s claim about the influential figures to determine their identities. We are also considering taking legal action against him for defamation,” Gen Chakthip said.

Gen Chakthip maintained that Gen Paween’s transfer to the southern border area was not done out of spite, but rather because they believed he had good knowledge about human smuggling so he should have fit the new position well.

Gen Chakthip also said that the transfer was supported by Gen Paween’s supervisor.

“There was no attempt to persecute him,” Gen Chakthip added.

Gen Tesa accused his former subordinate of telling only half-truths, which he said would damage Thailand’s reputation in the eyes of foreign countries. He said that what Gen Paween had told the Australian media could discourage several thousand junior police officers all over the country.

The spokesman maintained that the government was working efficiently in tackling the problem of human trafficking and trade. He added that a number of state officials were being prosecuted as part of the effort.

The crackdown on lucrative smuggling gangs followed the discovery of 36 bodies in shallow graves hidden deep in a mountain near the Thailand-Malaysia border in May. The discovery sparked an international outcry.

A case has been brought against 88 suspected human traffickers but interviewing all the witnesses, about 500 in number, could take as long as two years.

Gen Paween was listed as a key witness set to testify against officials and other individuals facing criminal charges over their alleged involvement in human trafficking.

Gen Chakthip said there were no issues with the trafficking case and that Gen Paween was the only police officer to raise allegations of intimidation. He also added that he had ‘no idea’ what prompted Gen Paween’s allegations.