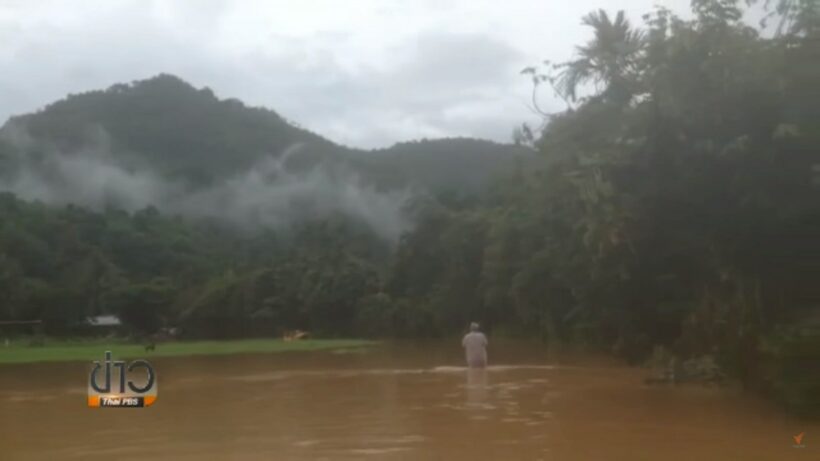 The flooding situation is now considered critical in the Sangkhla Buri district in Kanchanaburi province, situated on the Myanmar border, as Highway 323 is still about 1.2 metres under water, making it impassable to small vehicles.

Thai PBS reports that the heavily-flooded Highway 323 has also made it difficult to deliver patients from Thong Pha Phum Hospital to Phahon Pholphayuhasena Hospital in Muang district. Specially-modified pick-up trucks are being used for this purpose.

Chirakiat Phumsawat, the Kanchanaburi governor morning led officials to visit flood-hit areas and lay down a plan to move villagers to a temporary evacuation centre at the Laiwo tambon administration organisation (TAO). Tambon Laiwo is the area worst hit by the flood.

Soldiers from the 9th Infantry Division have provided mattresses and tents for the flood evacuees at the centre.

Also affected by the flooding is Uttamanusorn Bridge, better known as Sapan Mon Bridge, a famous wooden bridge across the Songaria River in Sangkhla Buri district. Soldiers from the Lat Ya Task Force, villagers and boat operators were mobilised to remove tree trunks and branches from the bridge pillars and their weight could damage the bridge.

Pakorn Kanwalee, the Sangkhla Buri district chief, has ordered a temporary closure of the bridge to tourists. The bridge has been cordoned off at both ends, manned by defence volunteers around the clock. Only villagers are allowed to cross the bridge for daily activities, but they are definitely not allowed to stay on the bridge. Boat operators have been asked to suspend all boat activities, including services for tourists, as a measure to prevent possible danger.

Man douses young Thai woman in petrol, sets her alight and is given bail