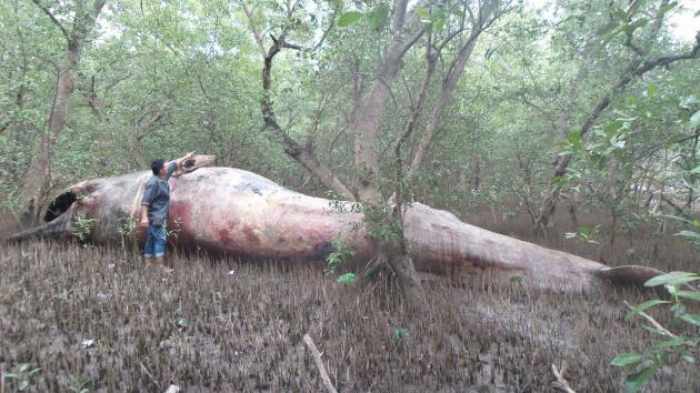 PHUKET: Necropsy results have revealed that a rare Bryde’s whale might have died of shock from getting caught in a seine.

We didn’t see any blood in its heart. Also, some of its skin had been scraped off, probably because the net was tightened,” Nantarika Chansue of Chulalongkorn University’s Veterinary Medical Aquatic Animal Research Centre said yesterday.

Her centre conducted the autopsy in collaboration with the Department of Marine and Coastal Resources.

The bull whale that beached in Phra Samut Chedi district of Samut Prakan province was 11.27 metres in length and might have weighed about 8 tonnes.

Nantarika said the cause of death was very likely unnatural.

“We have collected some samples of skin, kidney, liver, muscles and subcutaneous fat for further checks to determine if it was contaminated with heavy metals,” she said.

Noppon Srisuk, director-general of the department, said only about 45 specimens of the baleen whale existed in the Gulf of Thailand.

Sometimes they were sighted off such provinces as Samut Prakan, Samut Songkhram, Samut Sakhon and Phetchaburi.