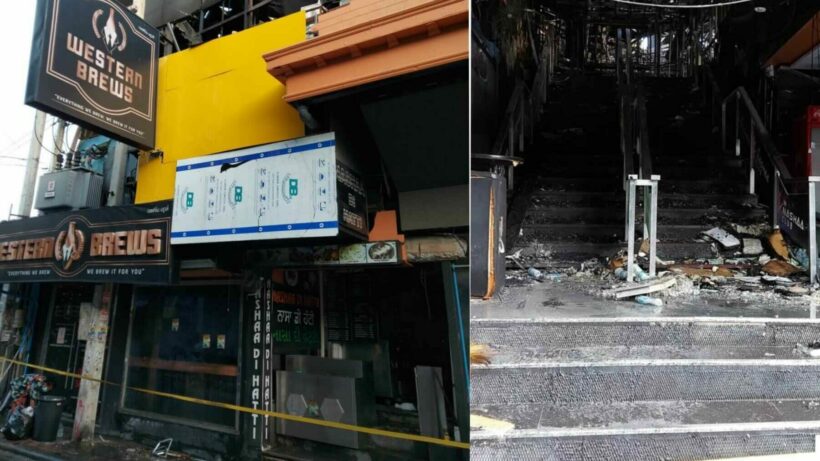 A nightclub caught on fire last night on Walking Street in Pattaya. Officials estimate the fire has caused millions of baht in damage. The fire happened at the Nashaa nightclub around 9:30pm, last night. There were no reported injuries or fatalities as a result of the fire.

More than 10 Fire department units attacked the blaze, which could be spotted from many kilometres away. Multiple residents expressed their alarm about the strength of the fire on social media. The fire departments worked for over an hour to put out the fire. They used a fire crane and ladder, with sections of the building continuing to smoulder hours after the fire had been extinguished. Following the fire being quenched, firefighters inspected the damage to the building.

The firefighters say heavy winds and decorative objects inside the nightclub, which proved flammable, added to the ferocity of the fire. They say that at one juncture, the fire had taken over the whole nightclub complex, a multilevel structure. The firefighters add that they managed to prevent the fire from spreading to other businesses on Walking Street.

32 year old Patvioda Srisuk, who is a watchman for the building, says he heard loud noises similar to an explosion that preceded the fire taking hold of the building, which started on an upper floor. The watchman adds that he initially thought the noise was a thief, so he investigated, only to discover a fire had erupted. He says he tried to put the fire out with a fire extinguisher, but the fire was too intense, and he was forced to call firefighters to help put out the blaze.

The cause of the fire is currently being investigated. Forensic officers are scheduled to inspect the scene sometime today to determine the cause of the fire. Early estimates peg the damage at 10 million baht, but an official with knowledge of the investigation says that estimate may go up. The Nashaa nightclub promotes itself with several superlatives as the “Biggest, most famous, and Number 1 Indian nightclub in the Pattaya area”. Prior to the fire, and the Covid pandemic, the Pattaya News says the club often drew hundreds of customers a night.

AlexPTY
i hope they got a good insurance... at least a week before this devastation
HolyCowCm
1 hour ago, gummy said: you forget one Keeping warm 😁 And another. Maybe they had some marshmallows.
Saunk
Insurance scam. Not complicated.