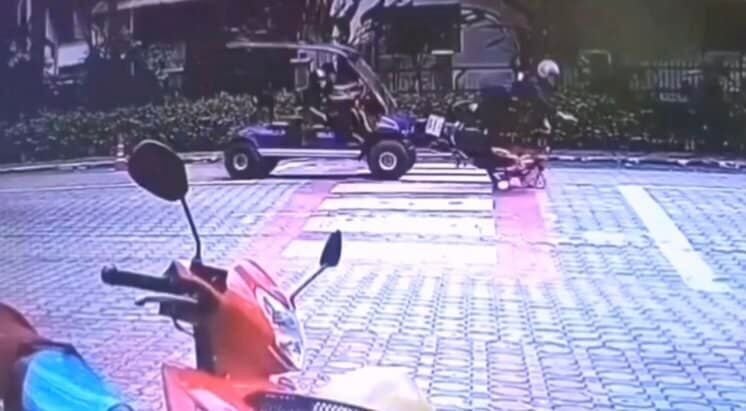 A father is seeking justice after his son was hit by a golf cart driven by an American man nine months ago, saying legal proceedings have made no progress. Although, the question of who is to blame for the accident has been up for debate. Some people who saw a video of the accident on social media say the motorbike rider was driving too fast in the residential area. The father, on the other hand, says the accident was at the fault of the American, and he has asked police to investigate.

The 19 year old son was working as a food delivery driver when his motorbike was hit by a golf cart in a luxury neighbourhood in Nonthaburi, a suburb just outside Bangkok. Reports say his son broke both his arms in the accident, which happened in May of last year.

The father told Thai media that there has been no development in the case. Instead, he says, his son was charged with reckless driving causing damages to others’ assets. He says his son was also out of work for a while due to his injuries. With no new developments in the case, the father visited the Pak Kret Police Station asking officers to investigate the case. HolyCowCm
10 hours ago, Stonker said: We must have been looking at different videos. In the one I looked at, at https://www.sanook.com/news/8515926/, which includes clear slow motion, he's very clearly looking straight ahead and never glances down, and the driver of the…

Marble-eye
11 minutes ago, HolyCowCm said: Ok, you got me there. But isn't the underlying rule is when safe to do so. Rules? They will say: We don't need no stinking rules. I suppose that the "when safe to do so"…
Stonker
2 hours ago, HolyCowCm said: Just looking at the same video again. Now I understand why the golf cart veered. Do you see the cone left side on that road before the veering? It looks like it is a warning…