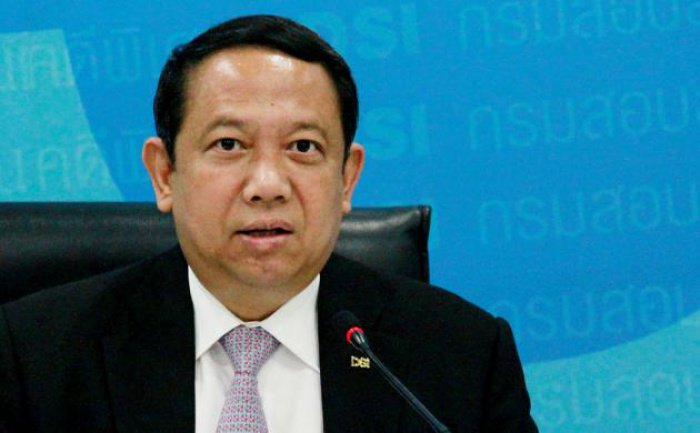 PHUKET: The National Anti-Corruption Commission yesterday announced that it had temporarily frozen nearly 60 million baht in assets of former Department of Special Investigation director-general Tarit Pengdith and a former academic attached to the Revenue Department, Suwat Charumaniroj, pending probes into the source of their wealth.

NACC secretary-general Sansern Polajiak said a fact-finding committee appointed by the graft watchdog on October 30 found that there were grounds to believe Mr Tarit and his wife had concealed their assets and were “unusually rich”.

Mr Sansern said the NACC action against Mr Tarit had nothing to do with corruption allegations, but were solely because of his alleged unusual wealth.

NACC director Vicha Mahakhun said the agency had frozen 40mn baht worth of assets belonging to Mr Tarit. They comprised cash from several bank accounts, land title deeds in Nakhon Ratchasima, Chai Nat and Pathum Thani, two-storey concrete buildings, houses, and vehicles such as a Mercedes-Benz and a Toyota Alphard.

Mr Vicha said the agency had ordered Mr Tarit, his wife and their children to submit a retroactive asset declaration within 30 days.

The NACC would compare their new asset declaration with ones Tarit submitted earlier to determine if there was any irregularity, Mr Vicha said.

A source said the NACC had acted on public complaints and appointed a panel in October last year to launch an asset investigation against Mr Tarit, which found that he transferred assets soon after being replaced as DSI chief last year.

The panel also found that he withdrew a lot of money from several banks, transferred securities, and changed ownership of his land.

The NACC ordered Mr Tarit to explain the source of his assets and provide reasons for his recent actions in relation to his assets. The agency may freeze additional assets.

Mr Tarit hit back over an allegation he is “unusually rich”, saying the value of his assets had only risen 3mn baht over the past five years – from 37.3mn baht to 40.9mn baht.

He said he declared his wealth at 37.3mn baht to the NACC when he was appointed secretary-general of the Office of Public Sector Anti-Corruption Commission in 2009.

Mr Tarit said he faced an asset investigation because he had overseen important cases as DSI chief, and as a result he had been sued more than 30 times, 19 of which had been dropped.

“I am confident that I will receive justice from the court and I will fight to the Supreme Court in every case,’ he said.

Asked if he knew why the NACC seized his assets on March 16 but waited more than a month to announce the seizure, Mr Tarit said he suspected the agency waited to see the final list of more than 100 officials suspected of corruption.

He said he was not on that list, which was submitted to Prime Minister Gen Prayut Chan-o-cha on Friday for disciplinary action to be meted out.

Mr Tarit said the deadline for him to submit a new assets declaration was today and he would seek permission to postpone submitting it for another 30 days.

Meanwhile, the NACC froze 19mn baht in assets belonging to former academic attached to the Revenue Department, Suwat Charumaniroj, his wife Thitirat Charumaniroj, their daughters Nopradee and Chanapa, and Thanat Patimavadi, who is linked to the family.

The move came after the NACC on February 4 appointed a fact-finding panel headed by Supa Piyajitti which found that there were grounds to believe that Mr Suwat was unusually rich and may have transferred, converted and concealed his assets.

Mr Suwat has been instructed to declare assets under his name or his wife, children or any proxy, within 30 days.

In another shake-up of the bureaucracy, Interior Minister Gen Anupong Paochinda will move three director-generals to inactive posts.

Siripong Hantrakul, Land Department chief, Wallop Pringpong, chief of the Local Administration Promotion Department, and Kwanchai Wongnitikorn, chief of the Community Development Department, were all to have retired at the end of September.

A source at the ministry said the three senior officials needed to step down because they could not comply with the government’s reform road map. The governors of four to eight provinces will be removed for the same reason.

Gen Anupong would submit the reshuffle list to the Cabinet for approval, the source said.