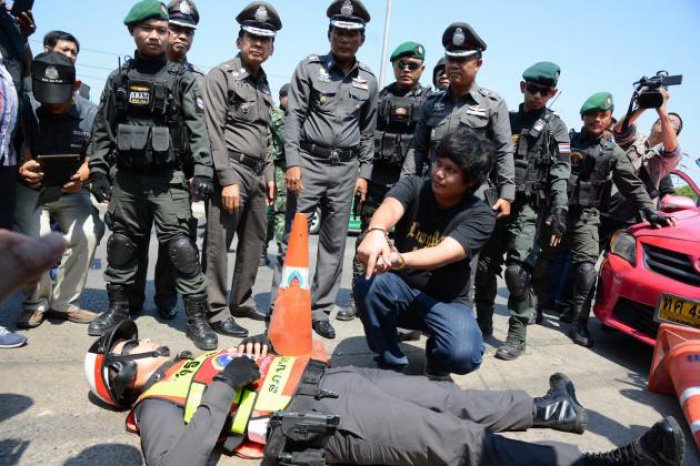 PHUKET: A Bangkok taxi driver, who ran over a traffic policeman, stole his gun and shot dead a middle-aged couple in Nonthaburi’s Bang Yai district on Friday, surrendered to police yesterday reportedly out of fear that he would be killed while on the run.

Anupong Reungsawat, 29, allegedly ran over Sgt Maj Jakkri Palasin while he was directing traffic, resulting in him sustaining a serious head injury and broken shoulder and leg.

He then killed apartment landlord Somchai Thaenjantha, 52, and his wife Ms Sangwal, 50.

Mr Anupong told police he shot the couple because they often scolded him for being too noisy at the apartment.

He claimed the couple recently humiliated him in front of other tenants by scolding him for playing a guitar too loud.

He also claimed the couple ransacked his room.

The gun was located behind a gas station as per Mr Anupong’s confession.

He is facing charges of the attempted murder of an on-duty police officer, stealing a police officer’s gun, double premeditated murder and carrying a gun in a public place without permission.

Monk disrobed for theft of heads from four corpses