Divers in the Strait of Malacca have reportedly found what they believe to be a 77 year old US Navy wrecked submarine in what is seemingly the concluding piece in a tale from World War II. The divers are currently awaiting confirmation of the finding from the United States Naval History and Heritage Command for verification after sending photos and other evidence to be reviewed. Over a five month time period, the divers gathered evidence over six separate dives to substantiate their claims that the shipwrecked submarine is that of the USS Grenadier, one of the 52 American submarines lost during the conflict.

The Grenadier, weighing 1,475 tonnes and measuring 307 feet long, was found about 150 km south of Phuket, Thailand in the Strait of Malacca. Singapore-based Jean Luc Rivoire, Frenchman Benoit Laborie, Australian Lance Horowitz, and Belgian Ben Reymenants-all who live in Phuket made the discovery. Reymenants was also one of the divers who helped in the dangerous rescue mission of the 12 Thai young football players who became trapped in a cave with their coach 2 years ago.

The Belgian has made a habit out of searching for sunken vessels over the years and would enlist Rivoire’s help in underwater searches as he had a suitable boat.

History of the submarine’s sinking details the story of the boat’s crew abandoning ship after Japanese bombs nearly killed them undersea. However, the sailors were lucky as all 76 of its personnel reportedly survived the bombing and subsequent sinking, but their luck soon took a dark turn. After Japan took the crew as prisoners, they were allegedly tortured, beaten and nearly starved for more than 2 years with 4 reportedly succumbing to the ordeal. 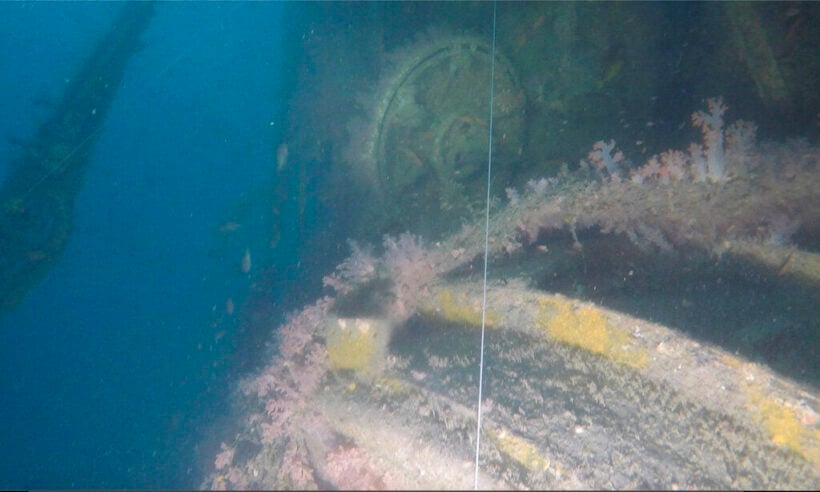 In this image taken from video, the top hatch of a conning tower can be seen from a submarine wreck somewhere in the Strait of Malacca on March 4, 2020. Divers have found what they believe is the wreck of a U.S. Navy submarine lost 77 years ago in Southeast Asia, providing a coda to a stirring but little-known tale from World War II. (Jean Luc Rivoire via AP)

The Belgian says he has been researching possible locations of shipwrecks for many years.  When they dived to look at one captivating object, they found it was much larger than they had originally expected. Horowitz says once confirming the object’s size, they searched archives to find out which vessel it could be.

“And in the end, we took very precise measurements of the submarine and compared those with the naval records. And they’re exactly, as per the drawings, the exact same size. So we’re pretty confident that it is the USS Grenadier.”

However, the confirmation could take anywhere from 2 months to up to 1 year to complete. But its 77 year old history may make it well worth the wait.

The Grenadier set sail from Pearl Harbor on Feb 4, 1942 embarking on multiple missions while sinking 6 ships and damaging 2. Then, it took to the waters again on March 20, 1943 from Australia, on its 6th patrole to the Malacca Straight and Andaman Sea. One month later, a plane was sighted causing the ship to be ordered to crash dive.  But it was too late.  Blasts from 2 bombs attacked the sub, leaving important parts of the ship damaged.

This Dec. 27, 1941, photo released by U.S. Navy shows USS Grenadier (SS-210) off Portsmouth, New Hampshire. Divers have found what they believe is the wreck of the U.S. Navy submarine lost 77 years ago in Southeast Asia, providing a coda to a stirring but little-known tale from World War II. Photo: United States Navy via AP

The next morning, the crew made plans to scuttle the submarine but was captured by an armed merchant ship and hauled off to Penang, a major port town in Malaysia.  Fitzgerald says the crew landed in a Catholic school turned Japanese prison where they then began to become the recipients of alleged abuse.

“The rough treatment started the first afternoon, particularly with the (enlisted) men. They were forced to sit or stand in silence in an attention attitude. Any divergence resulted in a gun butt, kick, slug in the face or a bayonet prick. In the questioning room, persuasive measures, such as clubs, about the size of indoor ball bats, pencils between the fingers and pushing of the blade of a pen knife under the finger nails, trying to get us to talk about our submarine and the location of other submarines.”

He says after a few months, the sailors were transferred to camps in Japan where they saw 4 of their compatriots die from a lack of medical attention. Such a tale that has spurned from the Grenadier has Horowitz enthralled in its history and significance.

“This was an important ship during the war and it was very important to all the crew that served on her. When you read the book of the survivors, that was, you know, quite an ordeal they went through and to know where she finally lies and rests, I’m sure it’s very satisfying for them and their families to be able to have some closure.”