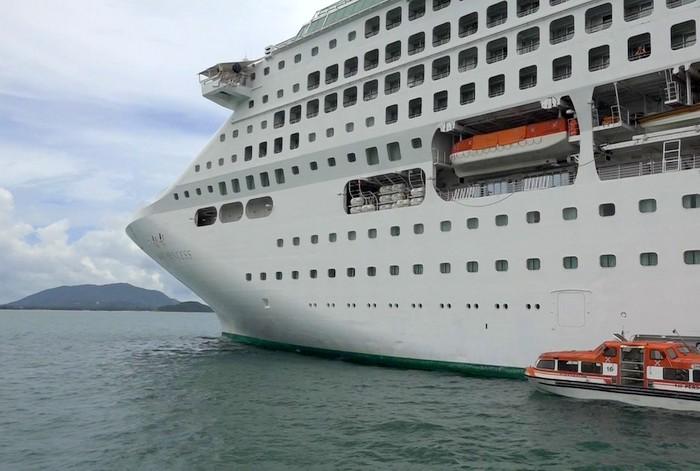 SAMUI: Government officials are getting excited about making Koh Samui a hub for cruise ship tourism to Thailand.

Officials met with private-sector cruise ship experts while touring a ship docked off of Samui’s gulf coast yesterday. The tour comes after last week’s announcement by the government in Bangkok that it has approved a plan to build a cruise port on Surat Thani province’s largest island.

“None of the ports in Samui are deep enough to handle major cruise ships,” said Pataraporn Sithivanich, the Tourism Authority of Thailand’s Executive Director for the Americas Region. “So cruise ships have to anchor about five kilometers off of the coast, meaning that it takes a while to transport tourists from the ship to land.”

Ms Sithivanich said the TAT estimates the number of cruise ship passengers to Samui to increase from an estimated 1,000 to 3,000 tourists per ship annually.

“It would be wonderful to have a standard size cruise terminal on Koh Samui, but the island’s roads, pubic toilets and tourist attractions also have to be greatly improved before we’re capable of accommodating such a mass influx safely.”

Mr Wattana said he estimates that tourists coming to Samui could spend 5,000 baht each.

“So, if a cruise ship with 3,000 tourists docks, we will have 15 million baht coming ashore just from that one ship,” Mr Wattana enthused. “Koh Samui will become a cruise center for the entire Gulf of Thailand, with transfers to Bangkok and Chonburi province, possibly even to Malaysia, Singapore, Indonesia and Australia,” he opined.