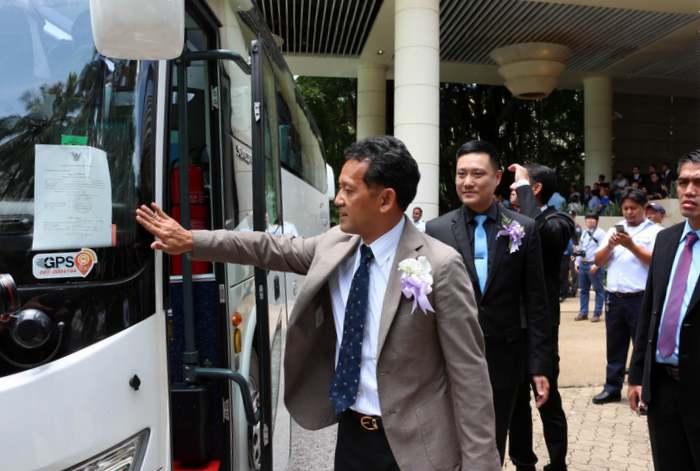 PHUKET: Phuket Governor Chamroen Tipayapongtada announced on Saturday that a whopping 100 new tour buses will be added to the province’s transportation network next month.

Speaking at the Hilton Phuket Arcadia Resort & Spa in Karon, the governor said that the approval of these buses is the first step in a much larger tourism promotion endeavor that would see the “doubling” of the number of tour buses on the island.

“Phuket provincial departments worked with the Department of Land Transport, the Phuket Tourist Association and the Bestlin Group Co Ltd to create solutions that would standardize tourism services in Phuket,” Gov Chamroen said.

“We’re calling this effort the ‘Livable City and Safe Travel Project,’ and we’re focusing on inter-departmental efforts to enhance the safety and convenience of our tourists.”

Governor Chamroen said the first 100 buses will be put into service on August 15, and that due to a subsidy agreement with the bus manufacturer, local tour operators can begin using the buses immediately, without having to make any down payment or paying any installments on the new vehicles.

A contract between the Bestlin Group and local shops bidding for tourist stops would purportedly pay not only for the Sunlong buses, but also the drivers’ wages.

“Furthermore, the bus operators will receive money from those shops, and the buses will belong to the tour operators after six years under contract,” Gov Chamroen said.

“We currently have more than 300 tour buses on the island, but it is not enough, especially during the high-season and festivals,” he added. “In the past, we’ve had to import buses from other provinces which are old, aren’t familiar with the routes, and could lead to an increased number of accidents.”

The governor said that the next phase of the ‘Livable City and Safe Travel Project’ will put another 200 additional buses on the roads.