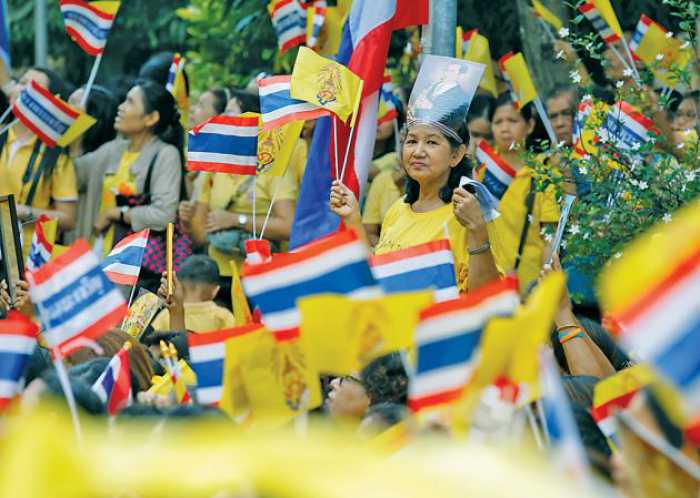 Crowds mass at Siriraj for The King
Phuket Gazette

PHUKET: Despite the cancellation of HM King Bhumibol Adulyadej’s public appearance yesterday at his doctors’ request, his loyal subjects gathered at Bangkok’s Siriraj Hospital – as well as other locations around the country – to wish the monarch happiness, health and longevity on his 87th birthday.

Clinical Professor Udom Kachintorn, dean of the Faculty of Medicine Siriraj Hospital, affirmed that HM The King was not ill but HM The King, who recovered from fever and colon inflammation only a few weeks ago, needed to rest. The cancellation was at the medical team’s request, and HM The King himself had expressed his wish two weeks ago to undertake the public audience, he said.

On this auspicious occasion, many organizations and individuals participated in morning alms offerings or other merit-making activities and celebrations throughout the day before attending candle-lighting ceremonies that started at 7:19pm nationwide.

In keeping with tradition, people wore yellow shirts this week and particularly yesterday, as a gesture of respect and loyalty to HM The King. The color is associated with his birthday (a Monday).

The Royal Household Bureau early yesterday issued the 11th announcement on HM The King’s stay at Siriraj Hospital. It was in relation to an earlier announcement that HM The King would grant an audience to other Royal Family members, civil servants and other members of the public at the Ammarintarawinitchai Throne Hall in the Royal Palace. However, after HM The King was examined by doctors on Thursday night it was decided that he was not ready to travel, the bureau said.

Many people who had camped along the route to the Royal Palace since Thursday night went to Siriraj Hospital to wish the beloved HM The King well and attend celebrations there.

The bureau yesterday also opened seven palaces including Klai Kangwon Palace in Prachuap Khiri Khan and Thaksin Ratchaniwet Palace in Narathiwat for people to sign good wishes for HM The King for one day.

Prime Minister General Prayuth Chan-ocha, accompanied by his wife Naraporn, yesterday morning led the Cabinet members to sign a well-wishes book for HM The King at the Royal Palace, it was stated on the Government House website. Foreign envoys, officials and members of the public did the same.

Her Majesty Queen Elizabeth II of the United Kingdom graciously sent the following birthday message yesterday: “It gives me great pleasure to send my warmest congratulations to Your Majesty on the occasion of your 87th birthday. The relationship between our two countries has lasted over 400 years, built on the enduring friendship between our people. I wish Your Majesty good health and happiness. Elizabeth R.”

A sea of yellow-clad people including government officials gathered at Sanam Luang in the morning for the Bangkok Metropolitan Administration’s ritual offering of food and other necessities to 188 monks.

The “Rak Phor” exhibition is being shown at the ceremonial ground to showcase HM The King’s achievements and projects, while state agencies and organizations have set up booths to provide general information and services to the public.

Elsewhere across the country, there were merit-making activities for HM The King including Thai soup kitchens in Nakhon Ratchasima’s and Uttaradit’s Muang districts. There were also a Red Cross-organised blood-donation campaign under the theme “Doing Good Deeds for the Father of the Nation” in Yala province and a luncheon for prisoners in Yasothon province.

Billionaire wanted in Pongpat case ‘may have fled to Canada’

Police corruption fugitive a billionaire Thai in the business world