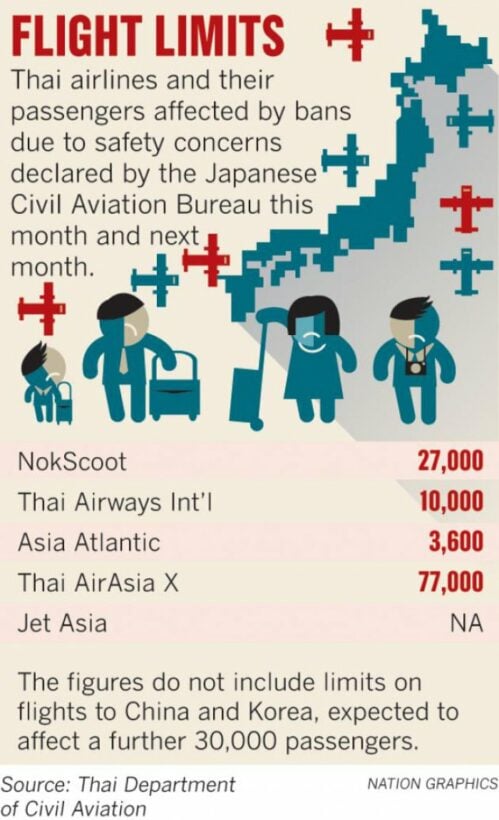 PHUKET: AT least five airlines operating from Thailand to Japan, China and South Korea, and expected to carry about 150,000 passengers, will be affected in the wake of safety concerns expressed by the International Civil Aviation Organisation (ICAO).

The airlines were set to carry about 120,000 passengers to and from Japan during this and next month. A further 30,000 passengers were expected to fly between Thailand and South Korea and China.

Prime Minister Gen Prayut Chan-o-cha yesterday ordered the department to resolve the problem within one month by asking foreign organizations and experts for help.

Mr Somchai said the five airlines had planned to operate charter flights to Japan during April and May with NokScoot carrying 27,000 passengers, Thai Airways International 10,000, Asia Atlantic 3,600, Thai AirAsia X 77,000, and the rest with Jet Asia.

He said a further 30,000 passengers would be affected on routes to China and South Korea.

Piya Yodmani, chief executive officer of NokScoot, said the airline would pause the 44 charter flights set to fly to Osaka and Tokyo over the next few months and would transfer 20,000 passengers to THAI.

The airline expected to lose about 400 million baht from the cancellations. It would affect its 120-strong aircrew and 30 pilots and co-pilots. NokScoot may also suspend a plan to operate charter flights to South Korea at the end of this year.

Thai AirAsia has witnessed a limited impact from the ICAO’s safety concerns, as flights to China are operating as usual. The airline operates 21 daily flights to 14 destinations in China.

Tassapon Bijleveld, chief executive officer, said that Thai AirAsia and Thai AirAsiaX have no plan to operate chartered flights to China, Japan and South Korea. The impact is limited to its planned scheduled flights to Sapporo in Japan.

Regarding tickets bought for travel after that period, he said customers have three options – take a full refund, postpone the travel date or change the flights to Tokyo or Osaka instead.

To date, the airline is maintaining its target of serving 14.5 million passengers this year and to achieve an 83 per cent load factor.

The JCAB recently announced that from March 29 it no longer allowed any Thailand-based airline to operate charter flights, to apply for any additional flights, add any new route to Japan or permit any aircraft type.

The action was in response to the ICAO expressing significant safety concerns during audit of Thailand’s civil aviation standards.

AirAsia X continues to the serve Bangkok-Tokyo route with twice-a-day flights, and daily flights on the Bangkok-Osaka and Bangkok-Seoul routes.

Mr Tassapon said only the Bangkok-Sapporo route would be affected, as the airline planned to operate this from May 1 onwards as a scheduled flight. The airline had received permission from the JCAB to be open for sales, according to document No 5470/5471 dated January 15, 2015.

Charamporn Jotikasthira, president of Thai Airways International, said the ICAO ban did not impact regular commercial flights to Japan, and all THAI regular commercial flights will continue to operate as scheduled, as per the previously approved 2015 Summer Traffic Programme. However, the suspension would hit two of THAI’s chartered flights – to Komatsu and to Hiroshima, in April.

He said THAI would explain the situation to China, South Korea and countries in Europe. He said Singapore and Vietnam are closely watching the situation in Thailand but there has been no reaction as of yet.

Lifting of martial law gets the thumbs up