A bus has collided with a train next to Khlong Kwaeng Klan railway station, killing 18 passengers and injuring 44. The incident happened just after 8am this morning. The chartered bus was carrying some 60 factory workers to a Buddhist ceremony and was crossing a railway track when it was struck by a freight train headed to Samut Prakhan, south of Bangkok, from the north east of the country.

Earlier it was reported in Thai PBS World that 20 people had died. The incident in Chachoengsao province, about 50 kilometres east of Bangkok, occurred as passengers were on their way to attending a Thod Kathin merit-making ceremony to mark the end of Buddhist Lent.

The chartered bus was carrying about 60 passengers, from Samut Prakan province to Wat Bang Pla Nak in Muang district.

13 patients have now been discharged from hospital.

Related news
Governor Maitree noted that the crossing has an alarm but no barrier to block traffic when a train is approaching.
“The province will install speed bumps and barriers as well as cut down trees near the crossing to improve visibility. Let this case be a lesson, and we will make improvements at risky spots so such accidents will not take place again.”

Rescue workers say they found the bus overturned and laying on its side, with part of the roof ripped off. Metal and debris littered the scene as well as bodies, and belongings scattered. CCTV, shown to the media by a government official, shows the bus creeping off the road onto the adjacent train tracks before the freight train slams into its side. 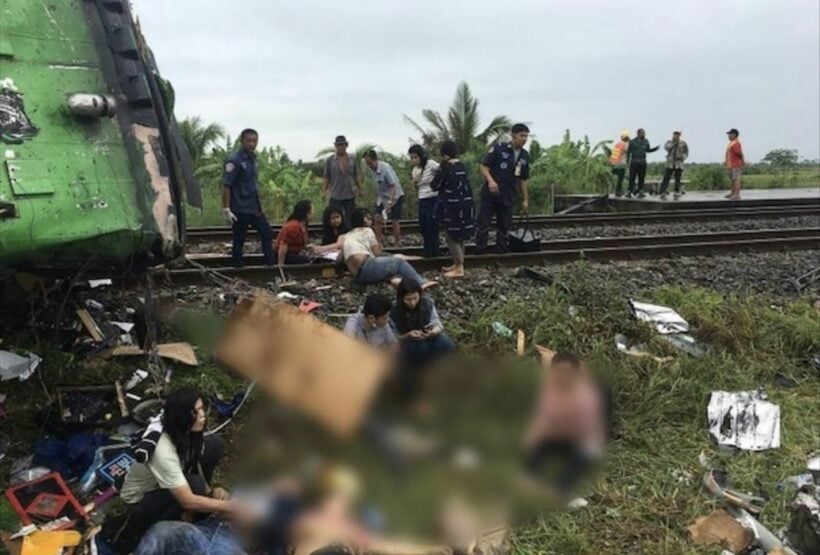 Deadly bus incidents are common in Thailand as the country ranks in the top 10 of the world’s most dangerous roads with speeding, drink driving and corrupt law enforcement officials contributing to its dismal ranking. 75% of Thailand’s road deaths involve motorbikes.

8,000 homes inundated in Nakhon Ratchasima after 2 days of torrential rain