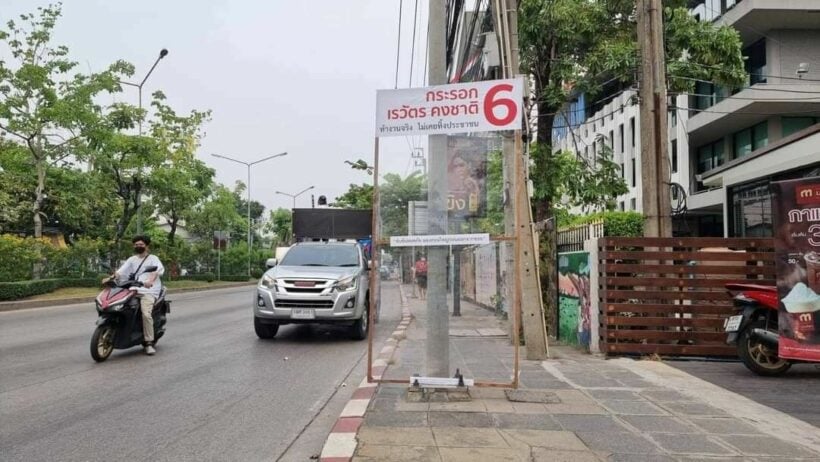 One inventive candidate for the Bangkok Metropolitan Council has come up with a new design for campaign ads, saying his transparent banners would reduce car accidents. The candidate said such banners would not block the visibility of drivers, as they can see through the clear plastic material, unlike traditional banners. However, Thai netizens, who have been keen on clearing the city’s sidewalks from campaign ad obstructions, say the new style of banners still block the sidewalks anyway.

With the elections for Bangkok governor and the Bangkok Metropolitan Council coming up, almost every sidewalk in Bangkok is now decorated with colourful campaign ads, showing the pictures, numbers and political slogans of each candidate. Many Thai netizens have shared their opinions online about the latest crop of banners, complaining that they’re blocking the sidewalks and wasting resources. Recently, a video showing a banner on a sidewalk in Bangkok obstructing a foreigner on a wheelchair went viral on Thai social media, making each candidate rethink their campaign ad designs.

Candidate No. 6 from the Democrat Party, Rewat “Krarok” Kongchart, shared his new style of banner on Facebook, saying, “New idea, new operation. Transparent political ads for safe traveling.” He shared that he aimed to create ads that are less obstructive to driver visibility, but that it’s not easy to find the materials and suppliers needed to develop such see-through banners. He added that his transparent ads also symbolise that his work for the city of Bangkok would likewise be transparent. He also made the analogy that he could see through every problem from the perspective of residents and clearly understand the solution, just like looking through the banners.

Netizens shared their opinions about the transparent banners in the post. Some said that while it was good to start thinking about residents, the new ads still had the weaknesses of being too big and blocking the sidewalks anyway. Some said that they’re a waste of resources, as they’re made from wooden frames and transparent plastic, which would later become trash.

Noble_Design
During the previous elections I have managed to keep quite a lot of these campaign posters which I then repurpose as floor linings for my dog house. They are made of canvases of various thickness depending on the budget and…
Loong
No thought for the poor motorcyclists that will not see them and crash into them!

Bluesofa
32 minutes ago, Thaiger said: The candidate said such banners would not block the visibility of drivers, as they can see through the clear plastic material, unlike traditional banners. However, Thai netizens, who have been keen on clearing the city’s…

Guest1
That with the tree is right, it was not the banner on the wheelchair stlry. And if it wasn't for the tree, it would have been for the next power pole. And in case, it would be enough space between…