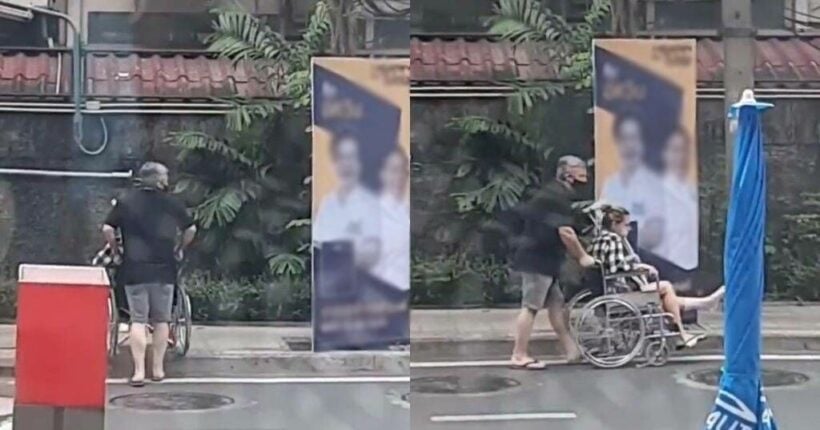 A video of a wheelchair user who got stuck on the sidewalk due to Bangkok’s governor election ads and had to take a dangerous detour into the street has gone viral on Thai Twitter. The incident follows many more complaints about the election banners, which have been blocking almost every sidewalk in Bangkok.

The city’s banner bombardment has given Thai netizens yet another reason to complain about Bangkok’s sidewalks, which they say already have limited walking space due to electric poles. Now Bangkokians said they’ve had to deal with more obstacles in the form of unwelcome election ads.

That’s when one Twitter user shared a video of a Western woman in a wheelchair who appeared to have a broken leg. When her partner was unable to circumnavigate an election banner blocking the sidewalk, he had to lower her chair down into the street and wheel it against oncoming traffic, before dashing across the road, crutches in tow, to a safer stretch of sidewalk because they couldn’t pass the obstructing banner. However, some have commented that the sign wasn’t the problem; a tree was in the way.

The banner in question belongs to former governor Aswin Kwanmueng, who is running for a second term at the post. He’s admitted that his ads did block the sidewalks in some areas. But he’s pinned the blame on the the company he outsourced to manage the banners, saying they hadn’t discussed how they planned to secure them in place. Aswin added that the problem would be fixed immediately, and if anyone spots a disorderly banner, they could report to him at anytime.

Meanwhile, another candidate campaigning for the office of governor, Chadchart Sittipunt, was praised for keeping his ads thin and few, compared to his running mates. Chadchart who is a leading candidate according to a recent NIDA Poll. He has launched a new style of banners, which no other candidate for governor had done before. One netizen admired the banner for its skinny size — similar in shape to an electric pole — its efficient design using minimal material and its meaningful message: “Select Chadchart for the safety of Bangkok”.

Bangkok’s governor election is scheduled for Mar 22. The position was open for applicants from March 31 to April 4 (today). As of this morning, there were about 30 candidates interested in the position.

Haole.TH
But he’s pinned the blame on the the company he outsourced to manage the banners, saying they hadn’t discussed how they planned to secure them in place. Aswin added that the problem would be fixed immediately Way to take responsibility…
Leo
The sidewalks in BKK are in a pathetic state. And that's where they do exist, because in the sois there are practically no sidewalks, and in the main arteries they can be blocked by condo/office/shop construction, street vendors and their…

Benroon
1 hour ago, Prosaap said: One more example of the lack of common sense of the thai Give us some others that don't apply to other countries ..... (They had to pass laws in the UK to deter motorists…