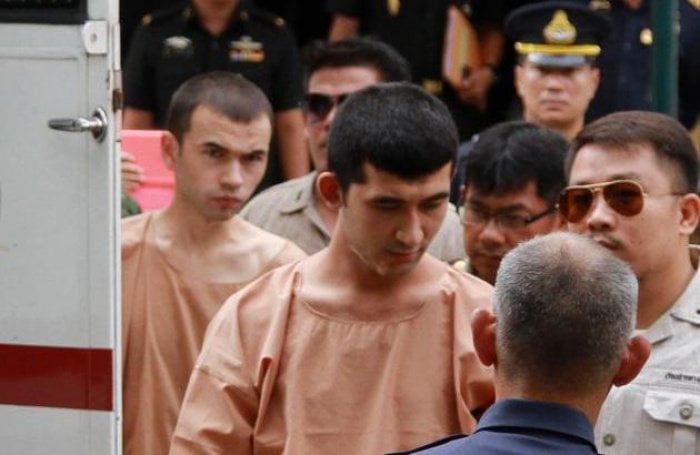 BANGKOK: The Military Court’s prosecutors are expected to indict the two suspects accused of involvement in the two bomb explosions in Bangkok in August, the lawyer for one of the suspects said yesterday.

Kanchai Choochart, representing Bilal Muhammed, 24, said he would outline the defense plan once his client had been indicted.

He was speaking at the Military Court after his client and the other suspect, Meiraili Yusufu, 26, were taken to court from a special detention center at a military base so the authorities could seek permission to further detain both suspects. Police identified them as Chinese Uighurs.

The court agreed to the request, meaning that police can keep them detained until Tuesday. The prosecutors have to decide whether to indict them within that time period.

The lawyer said that prosecutors did not indict his client yesterday because there were many detailed documents to review first.

Police have charged the duo with several offenses, including multiple murders, illegal entry and possession of weapons without a permit.

The Erawan Shrine blast in Bangkok on August 17 killed 20 people, mostly foreigners, and injured many others (story here).

No one was wounded in the blast at a pier on the Chao Phraya River the following day.

Mr Bilal was arrested at an apartment in Bangkok’s Nong Chok district, while Mr Meiraili was caught in Sa Kaew province trying to sneak into Cambodia.

Mr Bilal has confessed to assembling explosives that caused death and injury, Mr Kanchai said, adding that he did not know what other charges the prosecutors would levy. Mr Meiraili is represented by another lawyer.

Both suspects showed no emotion as they were taken to court yesterday amid tight security.

Over 600,000 riders registered for Bike for Dad