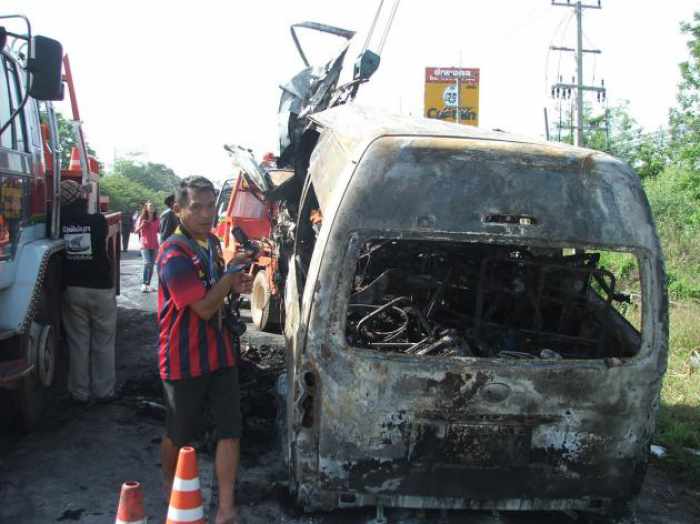 PHUKET: Twelve Vietnamese students and a Thai van driver died after their chartered vehicle collided head-on with an 18-wheel truck in Chaiyaphum’s Kaeng Khro district yesterday morning. The van burst into flames after the smash.

Three other students travelling in the van were seriously injured while the truck driver, Prayuth Leesui, 35, was also injured. They were taken to Kaeng Khro Hospital.

The van was part of a five-vehicle caravan that departed Bangkok on Sunday night for a seminar and youth camp at a church in Nong Bua Lamphu’s Muang district, Kaeng Khro Police chief Colonel Panas Boonyanyao said.

The four other vans had already past Chaiyaphum province when the last one, driven by Weerachai Phromsakul, 36, collided with the truck, he said.

Police suspect that Weerachai fell asleep at the wheel at about 7am on road number 201 (Kaeng Khro-Phu Khieo).

The charred bodies of the students are being kept at the Sawang Phutthatham Sathan Foundation in Kaeng Khro, pending identification so authorities can contact their families.

But the other Vietnamese students and their teachers contacted police and asked them to move the bodies to Khon Kaen’s Srinakarin Hospital for DNA tests.

The Ban Kijjanukhroh Church’s three-day youth camp is an annual event for 120 Thai and Vietnamese students from Bangkok, Khon Kaen, Udon Thani and Sakhon Nakhon. This year’s event was cancelled following the tragedy.

An initial probe by police found that the truck with 24 Myanmar workers on board was speeding and the driver lost control, slamming into an oncoming van.