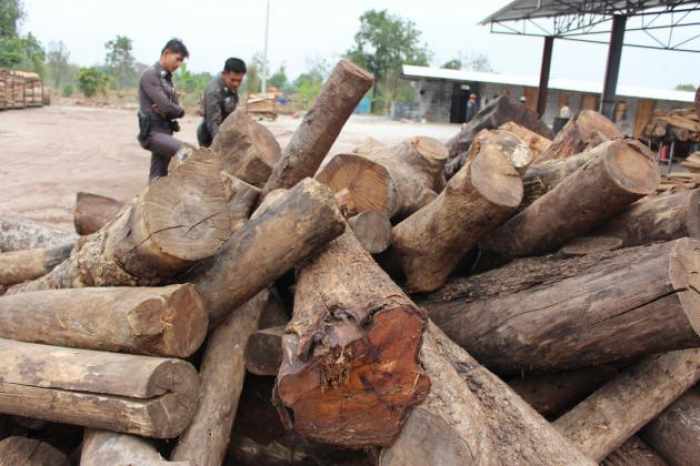 PHUKET: With the anti-money laundering law covering trade in endangered Siamese rosewood, investigators have been able to follow the money trail related to the timber smuggling gangs and have come up with a more complete picture of this illegal activity in the Northeast.

Investigators uncovered links between transnational gangs trading in the rare wood and drug traffickers, and learned that timber-smuggling convoys were similar to the ones used to smuggle drugs. The probe also found that the wood was sometimes paid for in narcotics, and found some links with local politicians.

After police broke up a gang based in Chaiyaphum on April 19 and subsequently confiscated Bt2 billion worth of assets, links were found to a Nakhon Ratchasima politician’s older brother, who allegedly tried to bribe the police to help the gang. The network, allegedly led by Kampanart Chaimat, had reportedly traded in Siamese rosewood and wildlife since 2000.

In line with the National Council for Peace and Order’s policy, Pol General Chalermkiat Srivorakhan, director of the Natural Resources and Environmental Crime Suppression

Centre, led a police crackdown on gangs said to be behind the felling of rosewood trees. They also uncovered a cartel led by Pakin Siriwarom, who was arrested in Ubon Ratchathani.

Pakin, believed to be a major rosewood trader with businesses in five provinces in the Northeast, had allegedly devised a new way of smuggling the rare wood using modified cars and 4-wheel-drive trucks.

When police asked the Anti-Money Laundering Office (AMLO) to go ahead with money-laundering charges against the suspect, the agency launched a four-month investigation into the gang’s transactions and even visited Savannakhet province in Laos, where shophouses were reportedly rented to store the smuggled wood.

AMLO found that the cartel had set up a second-hand car dealership and took in any car – even ones under mortgage to gambling dens – because they could be modified to smuggle the wood. The modified vehicles were used to transport the timber at night and parked at the dealership during the day to avoid suspicion.

It was also difficult for police to monitor vehicles because up to 100 of them were used in rotation to smuggle the timber. All cars used for smuggling were under lease so as to prevent police from tracing them back to the person behind the smuggling.

Every time issues arose over a vehicle lease or came up in court, the dealership would claim the car and take it back. This way, the cartel was able to launder the hefty profits it earned from the rosewood.

It is believed that once the timber crossed the border it would earn at least four times the price of the car.

Payments for the smuggled wood, meanwhile, were paid into the bank accounts of nominees, who would then move the cash in ATM transfers to avoid detection. Payments that were collected from Laos in US dollars were reportedly declared as money earned from fruit exports or from gambling in casinos.

Once the cash was in Thailand, it was turned into Thai baht and laundered through tour businesses, massage parlours, second-hand car dealerships or even deposited in banks where relatives of the gang members worked, the AMLO report said.

A joint police-Army-AMLO team searched 20 locations linked to Pakin’s group in Ubon Ratchathani, Mukdahan, Si Sa Ket, Amnat Charoen and Kalasin provinces and found several pieces of key evidence, such as wood dust and chains in the trunks of many cars on show at the dealership. They also found some weapons in the gang members’ homes.

This was fitted with what police investigators had learnt – that every shipment of rosewood involved a five-car convoy. The first car was used to see if the coast was clear, while the second and third would carry the timber, the fourth was used to distract police, while the fifth car – reportedly driven by an armed ex-paramilitary ranger – would provide protection. The group reportedly contacted each other using the popular Line mobile-phone chat application.

AMLO chief Pol Colonel Sihanart Prayoonrat said that individuals found to have helped the illegal felling and smuggling of rosewood would face four years in prison and/or fines up to Bt40,000. They would also face penalties under the money-laundering law. This is just like drug dealers, who face a jail term and fine, plus have their assets confiscated.