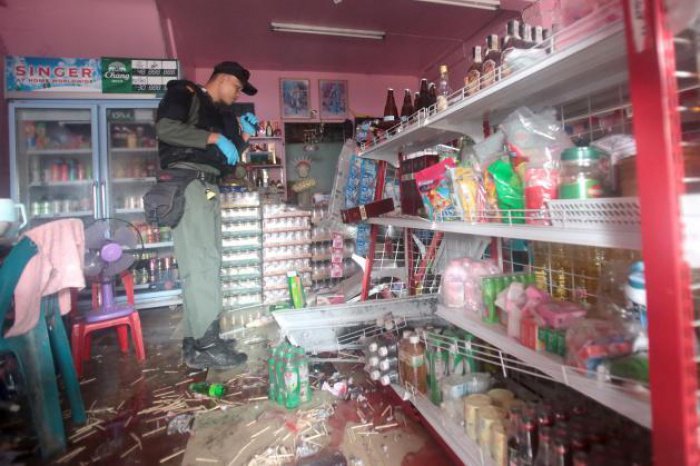 PHUKET: Bomb attacks continued to erupt in Yala’s Muang district yesterday, raising the number of injured over the past two days to 20.

Despite that, Deputy Prime Minister and Defence Minister Prawit Wongsuwan believes the blasts were staged to cause a disturbance and not serious casualties or damage.

“Most of them involved just small bombs,” he said.

The attacks started in Muang district at 7pm on Thursday and involved at least 20 separate blasts. Eighteen people were wounded.

“The Internal Security Operations Command [Isoc] and the National Police Office are working on these cases. We expect to make arrests,” he said.

While most of the bombs were not powerful, the one at a Chinese cemetery uprooted three electricity poles.

A bomb disposal team found three more bombs at the spot and defused them.

In the wake of the attacks, the Fourth Army Area has ordered all local officials to step up security measures and set up more checkpoints.

“We won’t impose curfews. But we are asking for co-operation from locals in giving tip-offs,” Pramote said.

Fourth Army Region Chief Prakarn Chonlayut said the bombers might have decided to take advantage of security officials needing to focus attention on the ongoing Thai Red Cross fair being staged in Yala.

National police chief General Somyot Poompanmoung said it was unclear if the attacks were related to the recent car bomb at Central Festival mall on Surat Thani’s Koh Samui.

Yala is one of the southernmost provinces that have been struggling with unrest for about a decade.

The ambush resulted in a gunfight, which lasted about 10 minutes. After the attackers retreated, four rangers were left wounded. One was shot in the head.