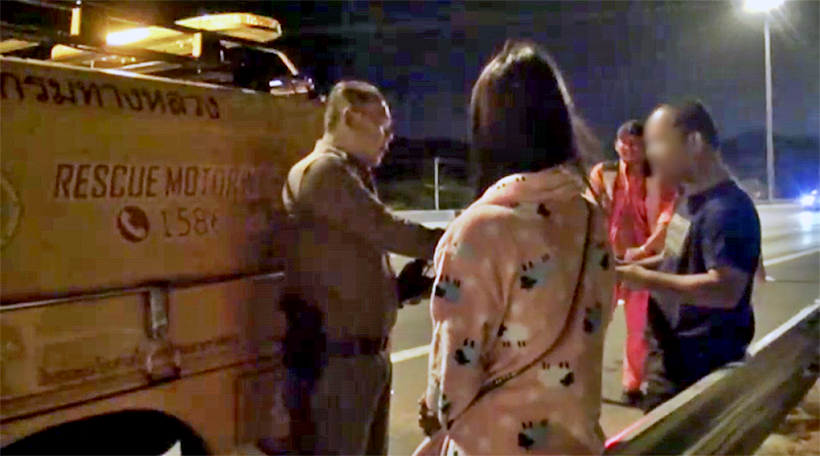 A 17 year old girl is safe after a potentially dangerous situation ended well thanks to her intuition to call a relative. The teenager ‘met’ a man online and they had been talking on the Line application for many months. But their two versions of events are not quite the same…

According to her report to police, the man invited her to enjoy the New Year countdown with him at Bang Saen Beach in Chon Buri. Cut to new years eve when Chonburi Police received a notification of a girl that was “lured and molested in a Black Toyota Yaris with a Bangkok license plates”.

Police discovered that the car was on the highway heading to Bangkok. Traffic police were informed of the situation and to look out for the vehicle. Soon after police came across the teenager waiting on the side of the motorway.

Police report that she was found “standing in fear”. She told police that she had been talking to the man online and that she lived in Nakhon Nayok Province and the man lives in Bang Na, Bangkok. He’d invited her to the new year countdown on Bang Saen Beach in Chon Buri and she agreed to join. He drove to Nakhon Nayok, north east of Bangkok, to pick her up and promised her that they would return home after the countdown.

When it came time to take her home the man told her that his legs were aching and drove into a hotel. According to the girl’s statement, they checked into a room and he started molesting her and attempted to rape her. She told police she fought back and demanded he take her home. Then while on the road back to Nakhon Nayok he started molesting her again in the car. The girl asked him to park on the side of the road, she jumped out of the car and called police and relatives for help.

Meanwhile, Tonatat, 27 years old and originally from Samut Prakan, claims that he lives in Bang Na. He provided a slightly different version of the story from the teenager.

He says he discovered the girl on an online dating app and they started talking. The girl told him to come to pick her up in Nakhon Nayok. When he arrived he told her that he was only 20 years old. He says they drove together to Bang Saen Beach and watched the countdown. Then while they were on the way back home his legs started to hurt so he decided to drive into a hotel to rest for a while. Tonatat stated that they only hugged on the bed, “just like normal girls and boys”.

Then he says he noted the girl was chatting on her phone to another man and realised that she had a boyfriend. This made him decide to drive her back to her home. He claims he didn’t know that she was only 17 years old.

After relating his story to emergency responders, police have invited him to come in for an interview at the police station. The victim’s parents have also been called in along with related officials for the case.

Thai retailers start plastic bag ban. What are you doing to help?