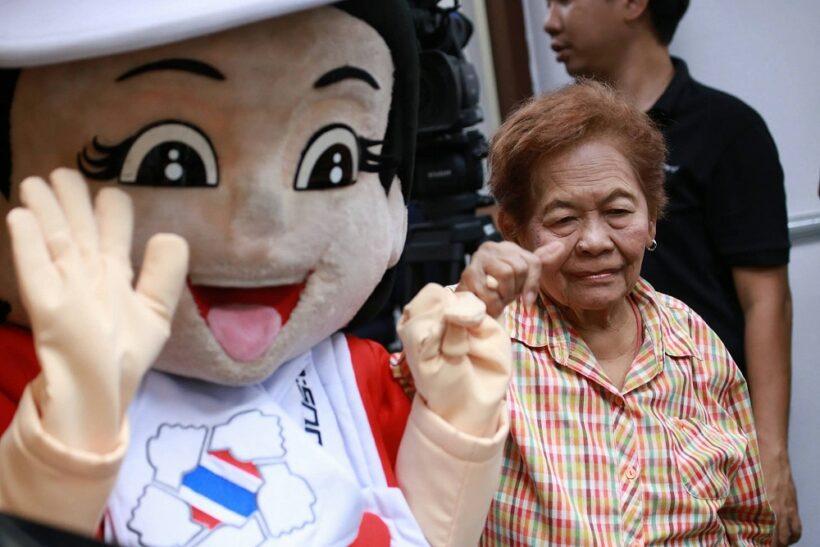 With the Government keen to find a winning strategy to help heal deep political wounds, you’d wonder why they’ve unveiled this creepy costume character to come to their aid.

“Nong Kiew Koy”, or “Miss Pinky Promise”, has become an overnight social media sensation after being introduced at the Defence Ministry as a “mascot for reconciliation”.

Netizens have not been kind to the NCPOs new pin-up girl describing her as a ‘creepy escapee from a sci-fi Chinese opera’ or ‘IT’s sister’ (I suppose you have to have seen the film). One said “I would scream my lungs out if I saw her in the dark.” Another unkindly suggested the acne-faced mascot might have been the PM’s love child.

Major-General Kongcheep Tantravanich, a spokesperson for the government’s reconciliation building committee has explained her rather haphazard appearance saying, “she worked a lot before she came here. She distributed leaflets and also rode on a boat”.

“We designed her by ourselves. We didn’t hire any outsourcers to do this job. We are proud of her,” Kongcheep told The Nation.

The Committee is proudly boasting the budget to come up with Miss Pinky Promise is a mere 10,000 baht. They say they simply added decorations to an existing costume. 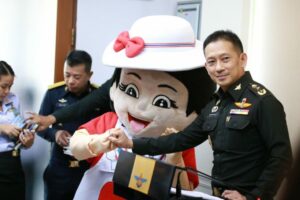 The Nation reports that the mascot’s stated job is to be a pretty, doll-like presence handing out pamphlets, posters and pocket books to promote the so-called “agreement of truth”, which was formulated by a military-dominated committee based on talks with political and social figures. The effort, initiated by the government, has been in place since the start of the year with the committee headed by Prime Minister General Prayut Chan-o-cha and including other senior military and government figures from junta-appointed bodies.

The tentative draft of the agreement includes mandates such as that people will “exercise rights and freedom appropriately by law”, “adhere to morality as an approach to living” and “learn, cooperate with and support the national strategy”. The last point refers to the 20-year, legally binding strategy the junta has formulated to steer future administrations.

The Junta, keeping up with all the latest fads, has even introduced a Miss Pinky Promise Line sticker (Line is the massively popular messaging App favoured by Thais) which the military say “…will help cool down heated chats. We wish to boost reconciliation awareness at the very local level.”

Kongcheep says the doll’s gender, depicted as female, represented “humbleness, gentleness and politeness”. The white colour on the mascot’s dress represented “pure power of all people to get away from conflict”, while the red represented the country as seen in the national flag, he said. A heart on the dress also represented “the united heart of all Thai people”, Kongcheep said. Her hat is decorated with a national flag ribbon and its scarf printed with the reconciliation campaign’s official logo – five hands linked around a national flag circle. “Her name, Pinky Promise, also means that we will turn to love each other like the old days,” Kongcheep said.

We don’t think that Miss Pinky Promise is heading to Phuket to spread her message of peace and reconciliation but suggest the Junta might be able to spruce up a few old Ronald McDonald costumes to continue Miss Pinkys Promise’s fine work in the great southern island. 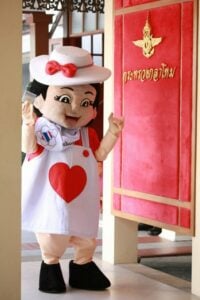 FRIDAY MORNING BRIEFING – All your news in 3 minutes