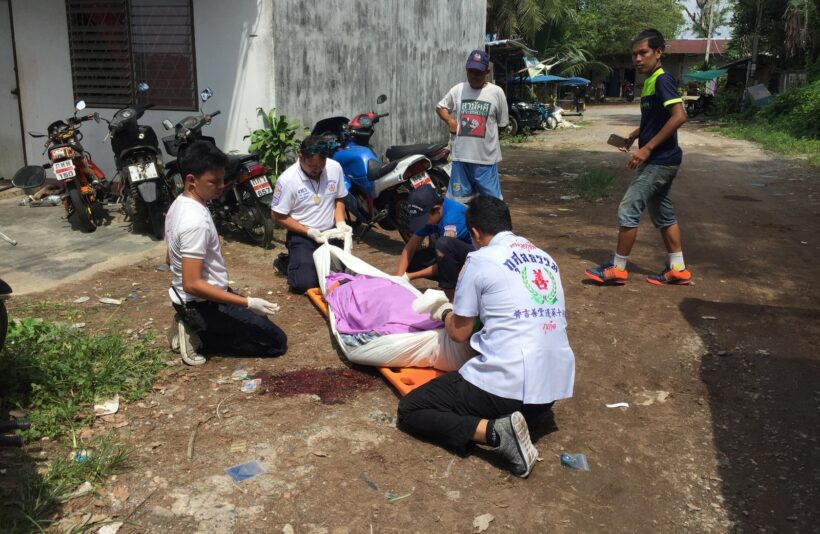 The Phuket City Police have been notified of an incident in front of a house in Soi Malipan, Rassada on Saturday (May 12).

Police and rescue workers arrived at the scene to find the body of a man who was identified as 30 year old Peerasit Saelim surrounded by a pool of blood on the ground. A kitchen knife was found lodged near his left armpit.

His body was taken to Vachira Hospital in Phuket Town.

A suspect, 31 year old Watchara Wichaikun, was rounded up by local residents who saw the incident before police arrived at the scene. Watchara, who had a bruised face, was taken to the police station to face charges of murder and carrying weapons in public without justifiable grounds.

A friend of Mr Peerasit, 34 year old Anupong Rakmee, told police that Watchara came to the house as usual to visit his girlfriend. He said they were always talking. This time he brought a knife with him. Mr Anupong thought that it was not normal so he called to Mr Peerasit.

After Mr Peerasit briefly talked with Watchara, he used a wooden stick to hit Watchara, but missed. Watchara then stabbed Mr Peerasit to death.

Watchara told police “The woman was my ex-girlfriend. When I arrived at the house I met with Anupong inside my ex-girlfriend’s house. Mr Anupong asked me to leave, but I refused.

Mr Peerasit, who was holding a one metre long wooden stick arrived and challenged me, asking… “Why am I coming here?” He hit me with the stick. I then used a knife to stab Mr Peerasit.”