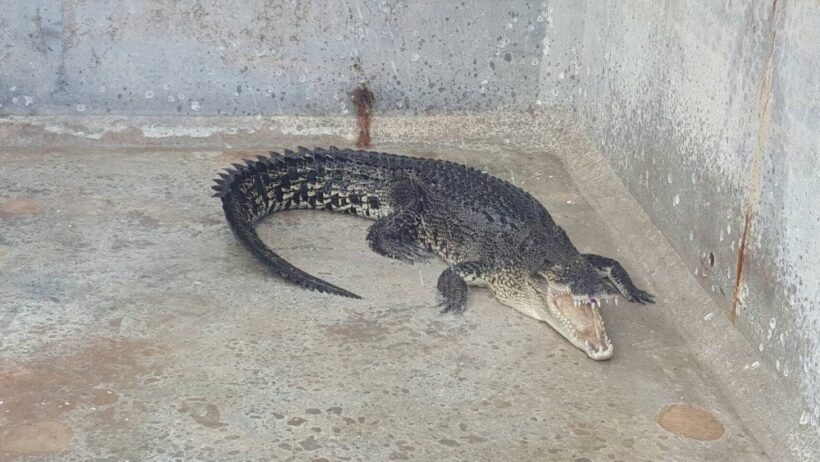 The 2.8 metre crocodile, Laypang, said to be an “alien species” that was caught around Laypang Beach several months ago, was transferred to the Phuket Zoo today (December 20).

During the transfer ceremony at the Coastal Aquaculture Research and Development Regional Centre 5 in Thalang district, Phuket Zoo manager Pichai Sakulsorn signed a three year agreement with Fisheries Department representative Paiboon Boonliptanont to take care of the reptile and to educated students on field trips about hybrid crocodiles.

The crocodile, which has been named Laypang, was found to originate from Phuket province but could not be released into the wild because of its hybrid species status.

It was moved from the centre’s pond to a 20 metre enclosure at the 30 year old zoo, which currently houses 200 other crocodiles. DNA and blood tests showed the crocodile was a mixed breed between Crocodolus siamensis and Crocodolus porosuswas.

The animal was first spotted off the coast swimming in the sea and then captured in a large pond connected to three hotels in Phuket in August, which was originally part of an old mine.

How can Thailand curb its appalling road fatality rate?