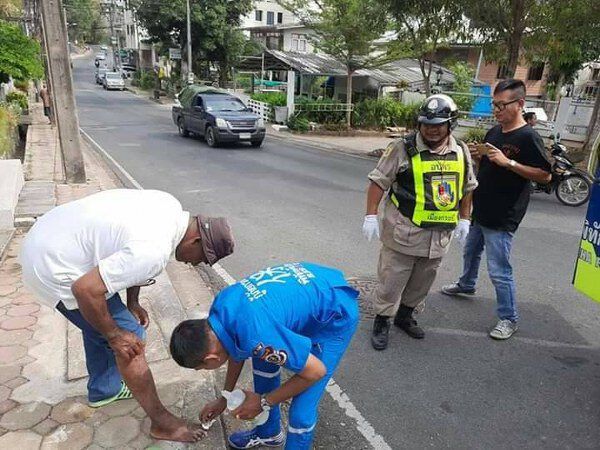 PHOTOS: The local volunteer was helping with traffic, when.... ddpostnews.com

A member of the Krabi Civil Defence organisation in Krabi has become a real-life hero after jumping in front of two motorbikes carrying 2 adults and 2 children. The motorbike was hurtling down a hill and was unable to slow down (you guessed it, brake failure), as it was getting to the bottom of the hill.

One of drivers showed… “It won’t brake!”

The volunteer, Tanawat Tratreng, saw another family walking towards the danger and jumped in front of the motorbike. The story has gone viral amongst Krabi social media after the volunteer risked his own life to help the family in danger.

“The motorbike would have run straight into people or a store at the bottom of the hill.”

The incident happened on Saturday, Children’s Day and was captured on video showing the man’s bravery and how 4 people were saved from a potentially perilous incident.

When asked why he did it the volunteer said that he knew a bad accident was about to happen.

The father was driving the motorbike with his wife and 2 children sitting behind him. They were on the way to a Children’s Day event at the Krabi City Public Park. Suddenly the motorbike brakes wouldn’t work. The volunteer was helping with the traffic flow when he saw the motorbike running down the hill. The father shouted to the volunteer… “It won’t brake!”. He jumped in front to stop the motorbike from driving straight into the store below or being hit by traffic driving through the intersection.

3 people received minor injuries including scratches from the minor crash.

“Better to be hurt here, then to let them get in a bad accident ahead.”

The rest of his rescue team came in to help with medical care, patch up the bike riders and sent them all on their way. We HOPE the owners of the bikes went straight to the motorbike repair shop!!!