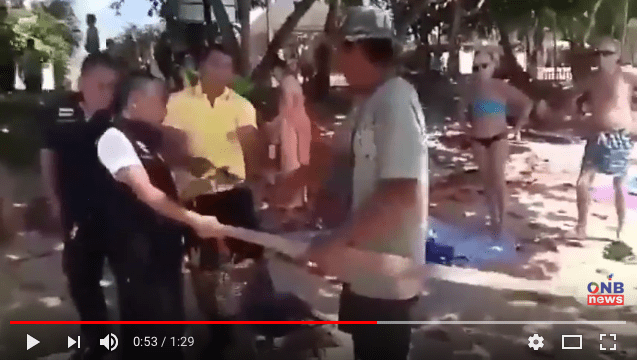 Officials from the Tambon Ao Nang Municipality had to call on other government agencies to send reinforcements to help crackdown on vendors hawking to foreign tourists at Ao Nang beach in Krabi’s Muang district.

Video of vendors chasing Tambon officials from the beach shows vendors were not happy with officials walking into ‘their’ workplace and asking them to tone down their sales pitch to tourists.

The officials said they were outnumbered by over 30 vendors from other provinces who had been hassling tourists on the beaches by trying to sell them food and alcoholic and soft drinks.

Officials claim a lot of tourists had filed complaints with the municipality that they were being bothered by vendors while they were relaxing and constantly being asked to buy food, refreshments and trinkets.

Officials tried to arrest the vendors this morning (Wednesday), resulting in a confrontation and tussle.

Eventually, only three vendors were arrested and fined 2,000 baht each.

Myanmar robber arrested thanks to his tattoo