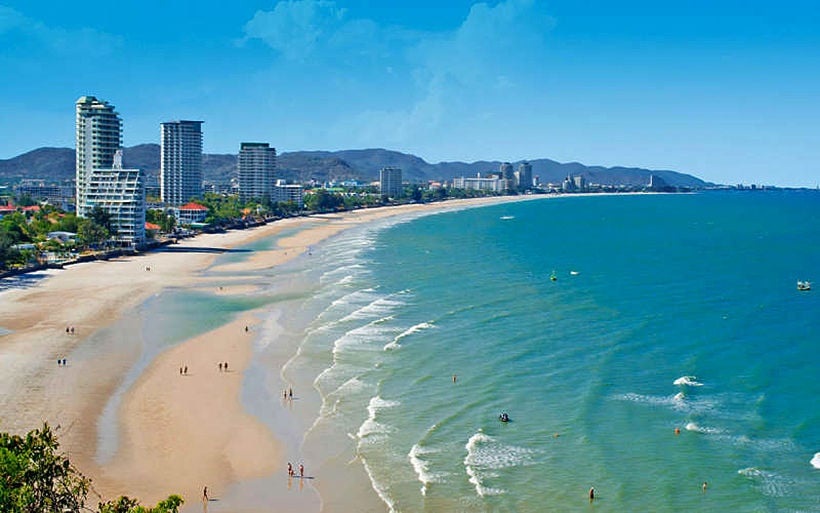 The math doesn’t look good as tourism associates estimated that the last quarter of 2021 would bring 100,000 international tourists to Hua Hin, but so far only 56 have arrived. The Thai Hotel Association explains the disparity is due to the entry process being complicated, the quarantine and testing fees being expensive, and the ban on booze and entertainment venues and nightlife activities.

In the first 2 weeks of Thailand’s grand reopening plans, only 56 of the predicted 100,000 travellers expected over the next 2 months have arrived in the seaside resort town of Hua Hin in Prachuap Khiri Khan province. And they aren’t staying for long. A total of 112 hotel booking nights were reported for those foreign travellers, suggesting an average stay of just 2 nights.

16 of those who entered Hua Hin from international destinations have now travelled to other areas in the key tourist-designated Blue Zone, while the remaining 40 have ventured elsewhere around the country. To reach the goal of 100,000 tourists, the town would need to record over 2,300 arrivals per day until the end of the year.

The Vice President of the Thai Hotels Association who also serves as an advisor to the Hua Hin – Cha-am Tourism Association says that a surge in Covid-19 infections in the province is certainly a deterrent for travellers, as well as the complicated Thailand Pass application process and strict entry requirements which discourage potential tourists from trying to come to Thailand.

“Some arrivals do not understand how to fill out the information and think that they will face another lot of strict preventive measures and mandatory quarantine after going back to their country of origin as Thailand is still in risk country.”

Many other factors are also creating obstacles to tourism recovery in Hua Hin including the lack of flights coming into Thailand and Hua Hin, and the health measures and restrictions implemented to keep Covid-19 from spreading out of control as tourists return to the town. Even after applicants are successful in getting approved for a Thailand Pass, there are still frustrations with the cost of RT-PCR tests and waiting for test results up to 24 hours in what essentially amounts to a 1-day arrival quarantine, though a newly developed RT-LAMP test may reduce test costs up to 80% and minimise wait times with results in as little as 20 minutes.

And travellers are also keenly aware that the Hua Hin they once knew is not the same as the Hua Hin they are arriving into. The vibrant nightlife that was a big draw for expats looking to let loose and have a few drinks still remains closed in most of Thailand including the resort town.

It’s common knowledge that bars and clubs are still opening illegally in many areas, but a covert night out with the risk of legal punishment isn’t nearly as enticing. And unlike key Blue Zone tourist destinations like Phuket and Bangkok, tourists in Hua Hin are not even allowed to have a drink with dinner as alcohol in restaurants still remains banned as well, creating a less-than-friendly atmosphere for arriving tourists.

TheDirtyDurian
5 hours ago, Stardust said: You were promoting the ban and more destruction of the tourism and more struggle of the operators and more loose their job. I read it. It is not about me or any habbit of me…

Thommo
On 11/19/2021 at 1:32 PM, Griff1315 said: Hope you enjoy.. We did but wow what a change since my last visit it took an additional hour to get there due to traffic and most hotels car parks appeared to be… DrPhibes
On 11/19/2021 at 9:53 AM, Stardust said: Exactly and it is what the operators think, too! But Clowns are Clowns and Clowns advocate Clowns. Billy knew about the danger of clowns!

Pattaya tourism quiet until entry and booze rules are eased