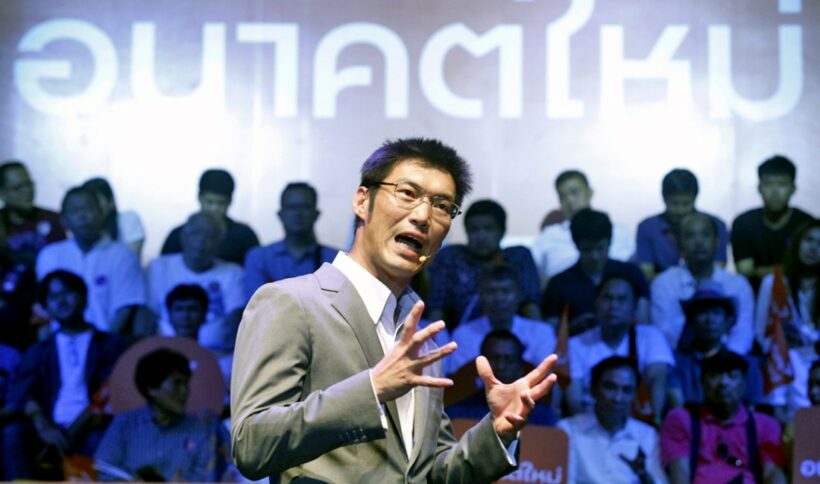 Thanathorn Juangroongru-angkit was predictably chosen yesterday to be the leader of the Future Forward Party, which he co-founded with the agenda of not only becoming the prime minister but also dumping the current, junta-written 2017 Constitution.

The scion of the Thai Summit Group won 473 votes with one abstention during the party’s first official meeting, attended by more than 700 founding members from all provinces nationwide and a couple of thousand people at Thammasat University’s gymnasium hall.

Voting members raised their hands to approve the party’s name, logo, policies as well its executive board. Piyabutr Saengkanokkul, another co-founder and a former campaigner to amend the lese majeste law, was elected secretary-general.

The four party deputies were Lt-General Pongsakorn Rodchompoo, who was removed as deputy secretary-general of the National Security Council by an Article 44 order in 2015, the former chairman of Amnesty International Thailand, Chamnan Chanruang, education advocate Kunthida Rungruengkiat and IT expert Ronnawit Lorlertsoonthorn. 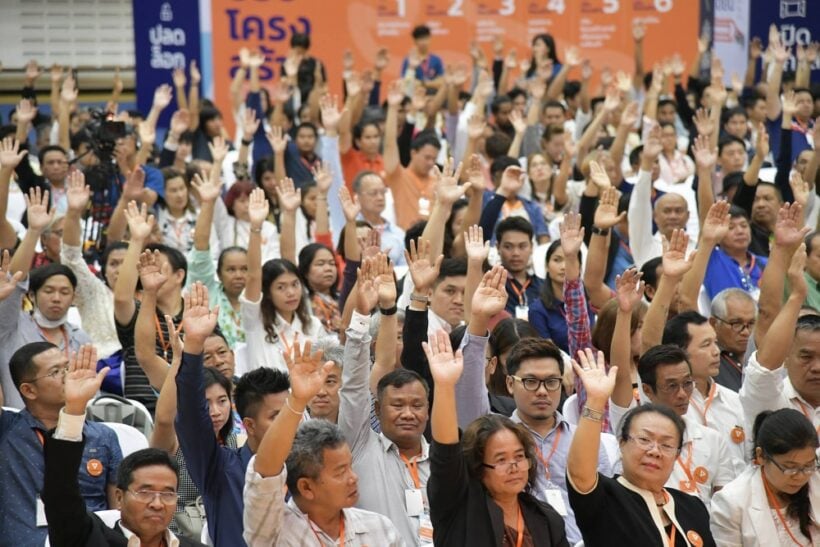 “I just feel that [the party] is a hotspot of leftist, front-row intellectuals,” tweeted a Twitter user @mizzphor.

The party aims to raise 350 million baht to fund its campaigning ahead of the election and will start accepting new members in August, when it is expected to be fully endorsed by the Election Commission. After the voting, the party meeting made a presentation on how Thailand had been locked up in a decade of political conflicts with a rap singer moaning about the junta government.

Thanathorn reiterated that while the party was still barred from spelling out its national policies under current law, it would stick to its goal of dumping the current charter, which he said only “stuck Thai politics in the same, old loop”.

“We all know that fixing this charter is hardly possible, topped by the fact that any amendment has to be approved by junta-appointed senators,” Piyabutr told a press conference.

“We have to campaign for a nationwide consensus that the 2017 charter cannot go any further. We will also have to revoke its Article 279 that empowers the current junta to overrule all laws,” the law expert continued. He was referring to how PM General Prayut Chan-o-cha has been granted absolute power by Article 44 of the defunct, interim 2014 charter. Article 279 still empowers the Prayut-headed National Council for Peace and Order with such a power until the NCPO becomes defunct.

The party’s agenda is also to call for the NCPO to revoke all its orders that obstruct the movements of political parties to “ensure freedom of expression and a free and fair election”, he said. This will also ultimately include an amnesty for all political prisoners under the NCPO era once the party gains power, Thanathorn added.

“The sooner the election is held, the better it would be for the country and for the NCPO itself,” Thanathorn said.

“Because the NCPO will only see its ratings decline continuously the longer it stays in power.”

He added that he would attend the NCPO’s planned meeting with political parties next month but only on the condition that the meeting is broadcast live.