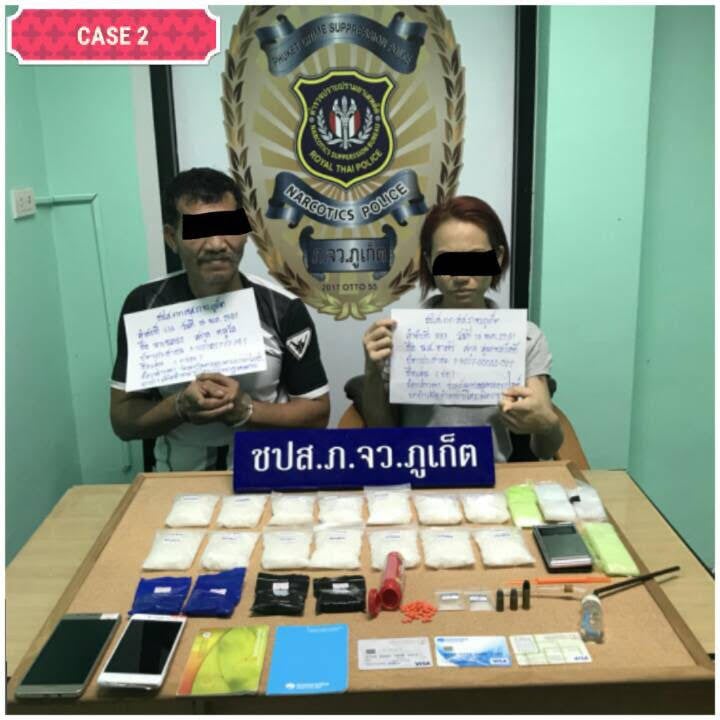 A team from Phuket’s Provincial Police have arrested four suspects.

Police first arrested 27 year old Adisak ‘Kae’ Boonsawang at an apartment in Soi Luk Kaew in Rassada. Police seized 25 of methamphetamine pills. He was taken to the Phuket City Police Station to face charges with possession of Category 1 drug with intend to sell.

Police then arrested 50 year old Chalong ‘Krom’ Noowan and 32 year old Jammaree ‘Por’ Soonthornsawat. They were arrested at a condominium in Kathu.

In that case police seized 848.83 grams of crystal methamphetamine, 855 of methamphetamine pills and three bullets. They were then taken to Kathu Police Station to face charges with possession of Category 1 drug with intend to sell and illegal possession of ammunition.

Then police arrested 33 year old Suchart ‘Ueng’ Kruakaew at a hut on Sirirat Road in Patong. Police seized 4 grams of marijuana at his property. He was taken to Patong Police Station to face charges with illegal possession of a Category 5 drug.

All the arrest came after police received a tip-off that Adisak was selling drugs. Police first arrested Adisak and then continued the investigation following the trail as the suspects told police about their contacts. The arrest of Adisak led police to the arrest of Chalong, Jammaree and Suchart. Chalong admitted that he bought drugs from a dealer in Songkhla.