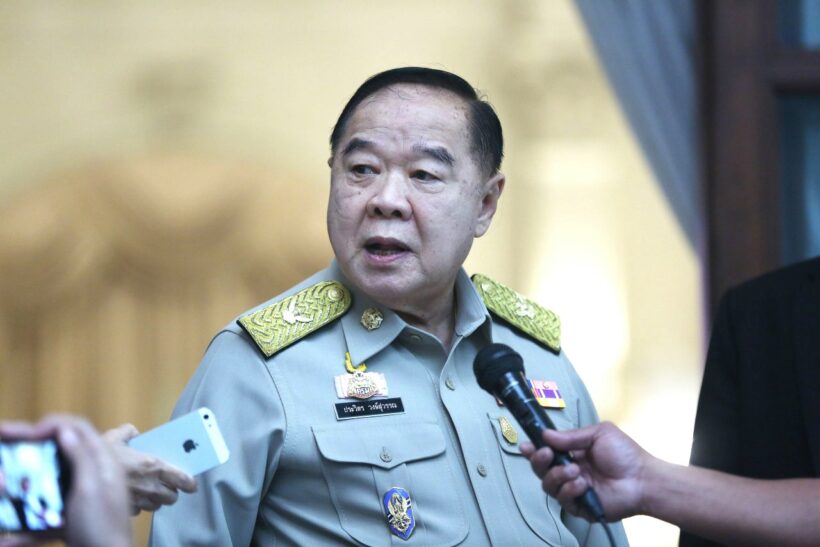 The PM General Prayut Chan-o-cha has been urged to exercise his absolute powers to suspend Deputy Prime Minister General Prawit Wongsuwan from duty as the deputy premier remains mired in controversy.

“We call on Prayut to use Article 44 to temporarily suspend Prawit from his posts as deputy premier and defence minister without pay until the investigation conclusion,” Srisuwan Janya, secretary-general of the Thai Constitution Protection Association, said in a statement issued yesterday, referring to the absolute powers granted to the head of the National Council for Peace and Order (NCPO). In the statement, Srisuwan said Prawit was facing an investigation by the National Anti-Corruption Commission (NACC) regarding whether he had intended to conceal his assets.

Early this month, Prawit landed in hot water after being photographed wearing a flamboyant Richard Mille wristwatch and diamond ring that he had not declared in his assets list to the NACC when taking office in 2014. Social media users later piled on the pressure by posting photos of Prawit wearing seven other luxury watches while attending recent events.

In his four assets declarations during his on-and-off membership in governments since 2008, Prawit has never declared a single asset worth more than 200,000 baht to the NACC. His latest declaration in 2014 valued his total assets at 87 million baht.

The investigation has also raised questions about the general’s “unusual wealth” regarding his total assets and the expensive watches. Pictures have shown him wearing what look like two Richard Mille watches that are estimated to cost between 4 million and 10 million baht. 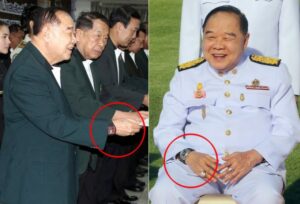 Srisuwan added that the deputy premier was also facing an online campaign pressuring him to step down over offhand comments he made about the death of cadet Phakhapong “Meay” Tanyakan, who died under suspicious circumstances at a military academy in October. Prawit’s remarks that he had also been previously disciplined harshly but had not died, seeming to blame Phakhapong’s poor health for his death, grabbed national headlines.

Srisuwan cited two previous suspension orders issued by Prayut, asking the premier to treat controversial incidents in a fair manner. The NCPO chief invoked Article 44 to suspend then-Bangkok governor MR Sukhumbhand Paribatra, who was under investigation over alleged irregularities during his tenure. Prayut also suspended Premsak Piayura, former mayor of Ban Phai Municipality in Khon Kaen, over accusations of misconduct in a case in which a reporter who exposed Premsak’s alleged engagement to a schoolgirl was stripped of his clothes as a form of public embarrassment.

“I hope Prayut will not use a double standard or favour his close associates. [Prawit’s suspension] is necessary to get rid of a bad apple to save the whole bushel, or the whole organisation. It would help to maintain the junta’s good image concerning fighting corruption,” Srisuwan said. Meanwhile, Prawit smiled yesterday before telling the media briefly that he felt tired amid the mounting pressure on him to resign.

For the past two weeks, the embattled deputy premier has remained silent on how he will explain to the NACC his possession of the items, only saying early on in the affair that he would submit a letter of explanation to the agency. However, local media have cited an aide to the deputy premier as saying that the watch had belonged to one of Prawit’s close friends who died earlier this year. The aide said the pair had known each other for more than 60 years since their elementary school days. The unidentified deceased friend, who was described as a businessman and watch lover, lent watches to Prawit, some of which were not returned, the aide reportedly said. 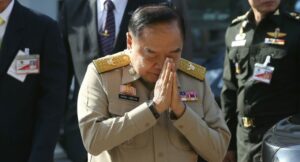 Deputy Prime Minister and Defence Minister General Prawit Wongsuwan greets expectant journalists as he attended a meeting at Government House yesterday amid a spiralling scandal about allegations of his “unusual wealth”.