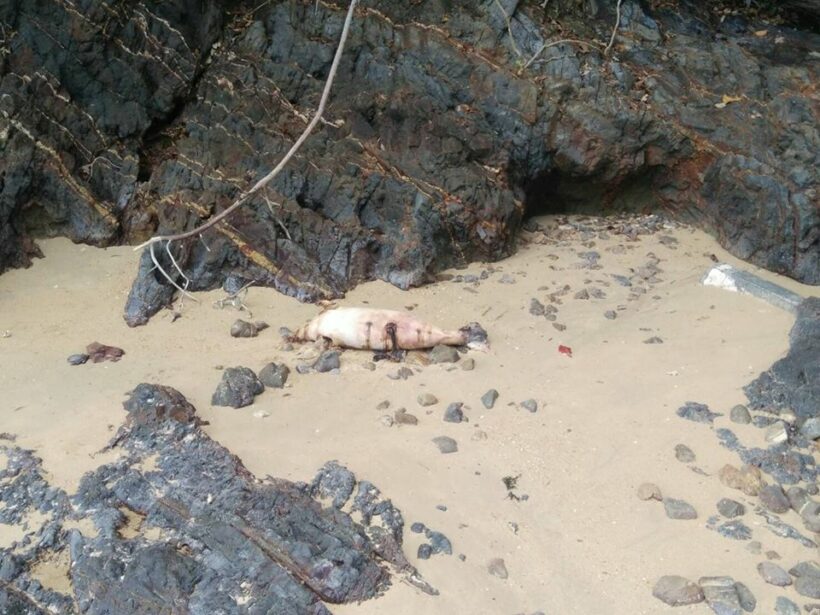 Kusoldham Phuket Foundation and Muang Phuket Police received a report from locals at noon today (January 26) about the dead body of a dugong washed up ashore on Somkiet Beach in Baan Laem Nga, Rassada sub-district.

The 1.2-meter-long dugong started to smell already and there were traces of cuts from sharp items on the head, skin and stomach with its entrails hanging out. The dugong is believed to be a baby dugong of 1-2 years that has been dead for at least one week.

The creature has been handed to the Rare Sea Animal Unit at Phuket Marine Biological Centre (PMBC) to make an autopsy.

The Chief of PMBC, Kongkiet Kittiwattanawong, said that the exact cause of death requires an autopsy. Initially, they only know that the dugong is young and could have been dislocated from its family.

“The dugong at this age usually stays with its mother. Last year, we only saw dugong eating seagrass near the PMBC and in the Thalang area. We hope to find the cause of its death.”

Mother & child re-united. And it feels so good.