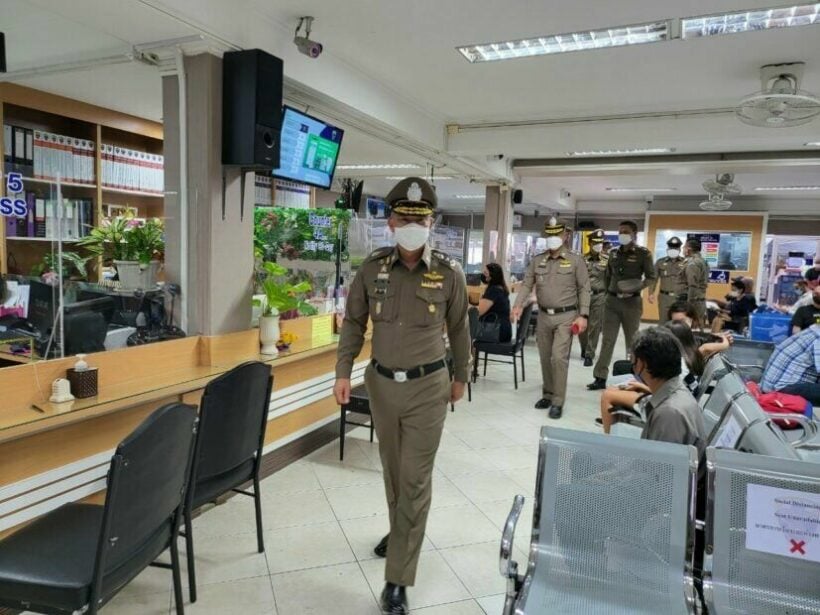 Police have paid Chon Buri’s immigration office a rather tense visit on Thursday to deliver a 9 point checklist to staff. Thai media reported that #8 on the list of demands was “Get off your phones and don’t take bribes”, as ordered by the lieutenant general leading the visit.

This news comes as Thailand prepares for an influx of international tourists following the slightly-less tedious Thailand Pass was introduced on May 1 – Thailand’s current digital gateway for anyone arriving from overseas. The lieutenant general explained that Thai immigration needed to balance following rules to maintain order, and giving possible leeway and helping tourists.

Pol Lt-Gen Prajuap Wongsuk added that staff should thoroughly check visa extensions, and check the paperwork of overstayers, people on warrants and people from Myanmar.

Demand #7 was for the office to have contingency plans ready to cope with the upcoming influx. The lieutenant general stressed that immigration staff are many tourists’ first exposure to Thailand, and warned that they needed to put their best foot forward to boost Thailand’s standing with the rest of the world.

The liutenent general said that in order to do this, immigration staff need to develop a “service mind” (customer service culture). He said that service needed to be fast, so that visitors to Thailand aren’t stuck waiting in “long embarrassing queues” (this is what he meant by “get off your phones”).

Thailand’s immigration offices, not the immigration at airports, have been notorious for inconsistency, occasionally requesting bribes, surly staff and generally being unhelpful. Whilst these situations are the minority, they get a lot of attention from frustrated foreigners trying to navigate through Thailand’s sometimes-bewildering immigration laws.

The governor of the Tourism Authority of Thailand says he remains hopeful that 20 million holidaymakers will travel to Thailand next year. Earlier this week, the Thai PM, Prayut Chan-o-cha, also predicted that Thailand would welcome around 20 million international arrivals next year, provided Covid-19 has been declared endemic and there are no new threats to tourism.

So far, in 2022, the first 4 months have attracted less than 1 million international arrivals into Thailand.

AdvocatusDiaboli
7 hours ago, palooka said: Crap not even one of you listened?" No, because he didn’t bribe us to listen 😉
BillO
My immigration office in Hua Hin is quite easy to deal with and always very polite. Never had to bribe anyone. The police need to look into their own house first.

23RD
I've dealt with Chonburi Immigration for 10 years now never had a problem. The long queues are caused by Falangs that turn up without the correct paperwork or paperwork incorrectly filled out . Prior planning and preparation prevent p#$h poor…

palooka
Aranyaprathet 90 day, fill out form prior to arrival, in and out 2 minutes.
HiuMak
Brownies worried nothing left for them?