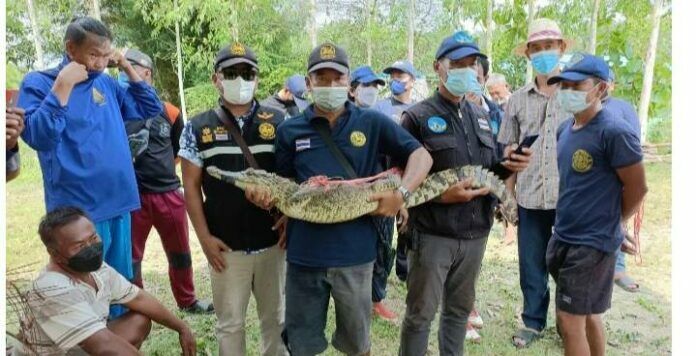 Two Chon Buri locals in Ko Chan district were in for a shock when hunting down a monitor lizard yesterday. The locals noticed that two of their ducks were missing, and they thought a monitor lizard they saw days ago had eaten them. The locals searched for the monitor lizard in a lagoon, when out of nowhere, a croodile snapped one local on the leg, and the other on their hand.

The locals emerged from the water and saw the small female crocodile. They then used water pumps to descrease the level of water in the lagoon, and catch the fierce croc. The croc, a female, was about 2 years old, about 1.4 metres long, and weighed 10 kilograms.

Another group of Chon Buri locals were horrified to find a crocodile roaming through their kitchen in Sri Racha district earlier this month. The owners called rescue workers, who took about 10 minutes to catch the crocodile with their bare hands. Authorities then took the crocodile to the Pure Yiang Tai Rescue Foundation before being given to the Sri Racha Fisheries Office. The house owners said they had no idea where the crocodile came from, and that they’ve never heard of crocodiles dwelling in the local area.

Yet another up-close encounter with wildlife happened in Chon Buri last month when a farmer in Ban Beung district said he walked in on a huge python in his chicken coop. The farmer said one of his chickens had been missing, and he assumed the python ate it.

Ramanathan.P
Covid restrictions and less human intervention has given the animals an upper hand to cross the line. Anyway it is their land that the humans encroached and now they are trying to reclaim back their territory....ha..ha..