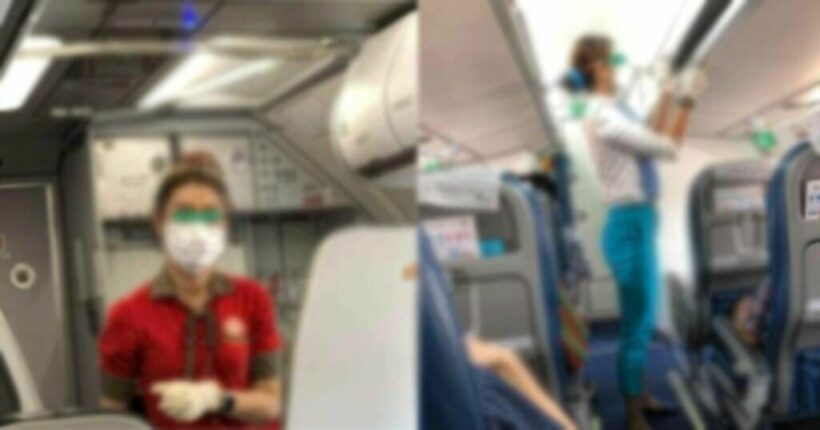 The rector of a top university in Thailand, later specified as Silpakorn University’s rector, has been identified whilst secretly taking pictures of female flight attendants on board a flight. The pictures he took went viral on Thai social media after netizens saw his sexually inappropriate caption…

“I always take pictures of the flight attendants and send them to junior team members to make them hungry.”

“Going to work in Chiang Rai with VietJet. Back tomorrow evening. The former minister sitting next to me asked, what am I doing? I said I always take pictures of the flight attendants”.

The original post was deleted not long after the story went viral. Thai netizens kept digging until finding a personal Facebook of one university rector who had posted lots of similar pictures. The account posted many images of female flight attendants from almost every Thai airline.

Later, Matichon Online revealed the interview with Chaicharn Thavaravej, the rector of Silpakorn University, who admitted that he had posted those pictures. The rector said he didn’t have any bad intentions or sexual purposes. He just took photos while the flight staff were working, and “it didn’t cause any damage”. He thanked the people who criticised him and were teaching him a lesson. He added that he would “be more careful”.

Thai media reported that the action of the rector were illegal. The persons in the pictures could sue him for causing them to lose their reputation, be criticised, insulted or embarrassed. According to the Computer Act and criminal law, the rector could face up to 3 years of jail time or 200,000 baht in fines.

The incident is another part of a developing #metoo culture growing in Thailand after it was revealed that a leading politician had been accused by up to 20 people of sexual misconduct and rape.

Ramanathan.P
What was his motive of taking pictures "Secretly"...at least he could have approached them before taking pictures of them. That is a noble and decent approach.

Transam
50 minutes ago, Ramanathan.P said: What was his motive of taking pictures "Secretly"...at least he could have approached them before taking pictures of them. That is a noble and decent approach. Fink the camera was fitted inside his shoe toe…
HolyCowCm
Now I would maybe be skeptical and question him being mischievous if he went to the bathroom directly after snapping a photo or two. Otherwise, who cares. Women are like art sometimes.

AdvocatusDiaboli
1 hour ago, Thaiger said: The rector of a top university in Thailand, later specified as Silpakorn University’s rector, has been identified whilst secretly taking pictures of female flight attendants on board a flight. Paparazzi …. Comes to mind here.

Chon Buri residents hunt for lizard when crocodile bites them