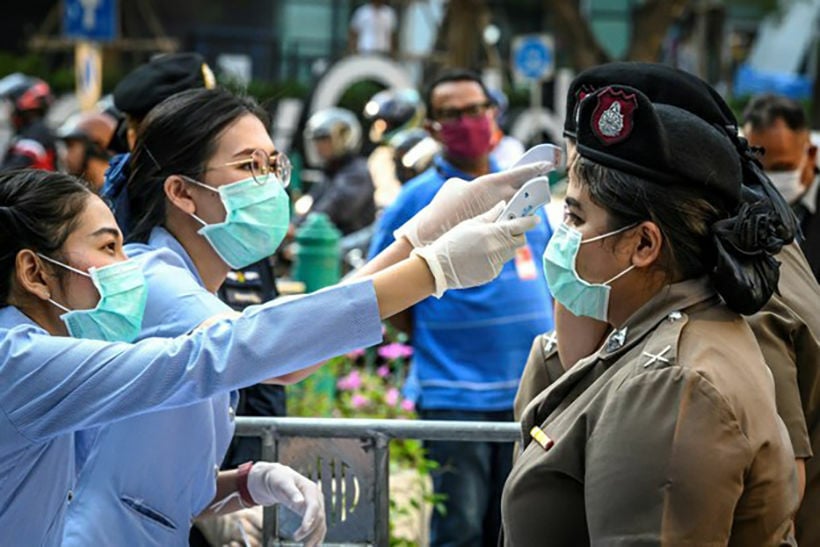 Thailand now has its first case of a new variant of a new Covid-19 Omicron variant. Yesterday, the Centre for Medical Genomics Ramathibodi Hospital confirmed tests of Thailand’s first case of the new recombinant variant, a hybrid of the BA.1 and BA.2 variants.

The World Health Organisation flagged concerns about the new variant last Tuesday, warning that XE could be the “most transmissible strain of the new coronavirus although its severity is still being investigated”.

Britain’s Health Security Agency has also announced that it’s monitoring 3 recombinant strains… coded XD, XE and XF. Scientists from Britain’s Health Security Agency reported the XE strain is a recombinant of BA.1 and BA.2, but noted that it has 3 new mutations that aren’t present in their parent sub-variants. Up to the last week Omicron XE had only been detected in Britain with 637 confirmed XE sequenced cases.

The new revelations comes amid a surge in Covid infections in the UK, which has again reached record levels, with an estimated 1 in 13 people infected with the virus in the past week.

At this time there are 6 Omicron recombinants of BA.1 and BA.2 – XE, XG, XH, XJ, XK and XL – currently under investigation around the world.

“So far there is not enough evidence to draw conclusions about transmissibility, severity or vaccine effectiveness.”

For the XD strain, it was first detected at the end of 2021 and by March 22, 49 samples had been found in France, Denmark and Belgium.

The XE recombinant mutation is not the Deltacron variant, reported over the last few months. Deltacron, a hybrid recombinant of Covid-19 Delta and Omicron strains, is now reported to “not spread quickly or cause severe symptoms”.

Today, Thailand’s Public Health Department have announced 26,840 new infections from PCR testing, along with 97 Covid-related deaths. There are 259,126 active cases currently under care, along with 1,838 “serious cases” with 23,412 people now recovered. 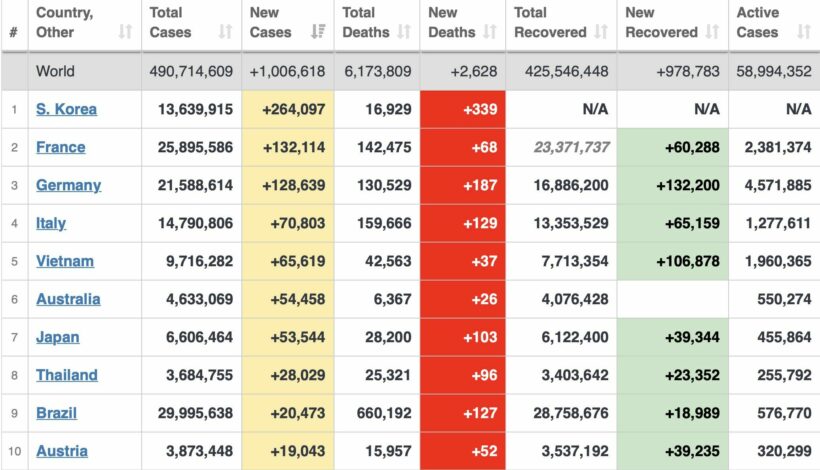 GRAPH: World daily infections, Top 10 countries – worldometers.info (some country data may not be reported as of the this time in the 24 hour cycle)

JJJ
2 hours ago, Guest1 said: One in 13 INFECTED people, NOT 1/13 of all people in GB are infected The article says “record cases” and “an estimated 1 in 13 people infected with the virus in the past week.” @Loongcorrectly…

Guest1
57 minutes ago, JJJ said: The article says “record cases” and “an estimated 1 in 13 people infected with the virus in the past week.” @Loongcorrectly notes this is not supported by the data anywhere. Actually, my pragmatism was really…

AdvocatusDiaboli
9 hours ago, Thaiger said: Britain’s Health Security Agency has also announced that it’s monitoring 3 recombinant strains… coded XD, XE and XF. The way they make up the names they should go into business manufacturing cell phones! Or is…
HiuMak
no mention of XE deadliness
JJJ
16 hours ago, Guest1 said: Actually, my pragmatism was really wrong, they do mean 5 Mill in total . The question is just: since the guardian posted that on fouls day, .... Some 4.9 million people were estimated to have…