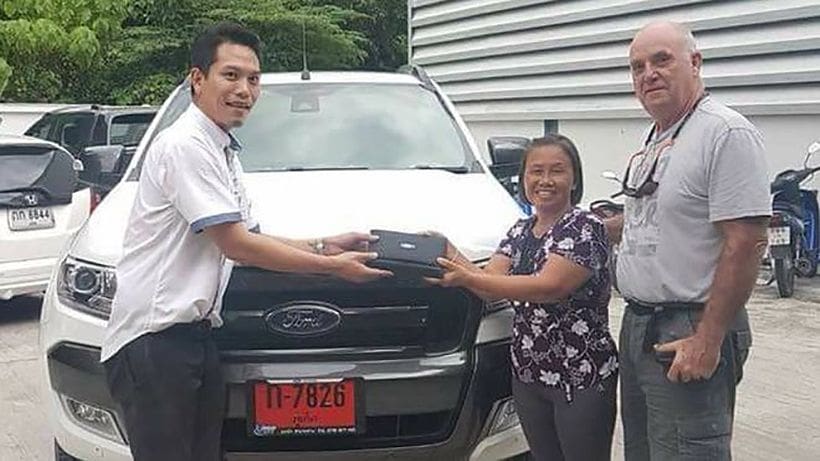 PHOTO: Alan and Nod receive the keys to their new pick-up truck.

After a few hours of interrogation three men admitted to collusion in the plot to murder the married couple.

Included in the latest interrogations was Khun Nod’s brother, Warun Satchakit, who was first set free on bail after initial questioning over the couple’s stolen white pick up, but was released before his later arrest when the car was located last Sunday.

The other two arrests are reportedly local friends of Khun Warut. In the confession they detailed the method of killing the pair. Warut confessed to organising and carrying out the killings. It is understood that he fired the gun that killed Mr Hogg and bludgeoned Khun Nod to death with a hammer.

Warut told police he then took the bodies to an area behind the house, near a creek, to bury them with a small excavator/back hoe. The corpses were found lying next to each other about 2 metres underground.

Happier times for the married couple – Alan and Nod

During the interrogation Warut has told police that the couple ‘repeatedly criticised him’ and that that he’d tired of the constant criticism and went about planning their deaths.

The plot unravelled after the killers allegedly stole the dead couple’s new pick-up and tried to get a quick sale for cash. A Lao man bought the car and was driving south on Sunday night when he heard about the missing couple and the missing car. He reported to police in Ayutthaya and was able to provide police with information that led to the trio’s arrest.

Police initially arrested Khun Warut after CCTV footage showed him entering the couple’s home and driving away in the pickup last Thursday but he denied any involvement in their disappearance. He was charged with theft of the pick up and released on bail of 100,000 baht at the time.

Friends of the couple had alerted police about their concerns over the missing couple as early as last Tuesday, two days before Khun Warut was first arrested.

Australian living in Chiang Mai hangs himself from a roadside tree

A backpack full of meth pills headed for Chiang Mai