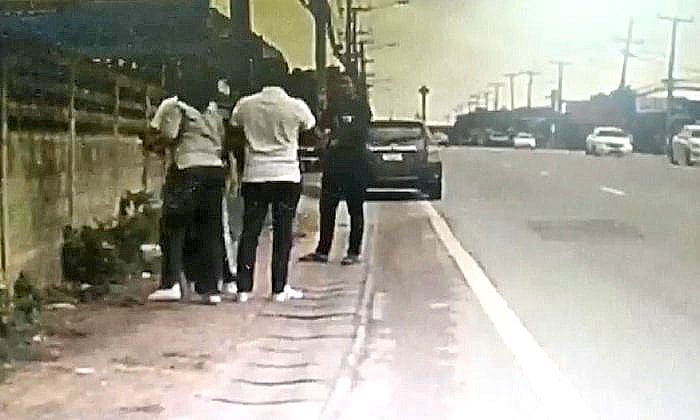 Footage from a dash cam shows a soldier advancing on a family of three, threatening to shoot them with a gun in Chiang Mai. The incident is related to a preceding road rage incident in the Mae Rim district.

Footage shows the mother and wife of the man trying to prevent them from continuing to argue as the soldier brandishes a gun.

Sanook reports that the incident luckily ended without a shooting. The soldier is expected to soon be in custody.

54 year old Father Amnat from Nonthaburi says he was with his wife and 19 year old son driving their Mazda on a trip to Mae Hong Sorn to make merit.

His son had slowed to stop off and buy some lottery tickets and this apparently enraged another driver who then tried to cut them off in his sedan. Both parties wound down their windows and the son yelled “Arai” (what) that further exacerbated the situation.

The other driver called for them to stop. He then threatened to kill the whole family with his gun, according to Amnat. They all drove off with the wife calling 191 amid fears that the soldier would hunt them down.

Mae Rim police confirmed that the man with the gun is a soldier connected to one of the army camps in the north. A summons has been issued after the family accused him of attempted murder.