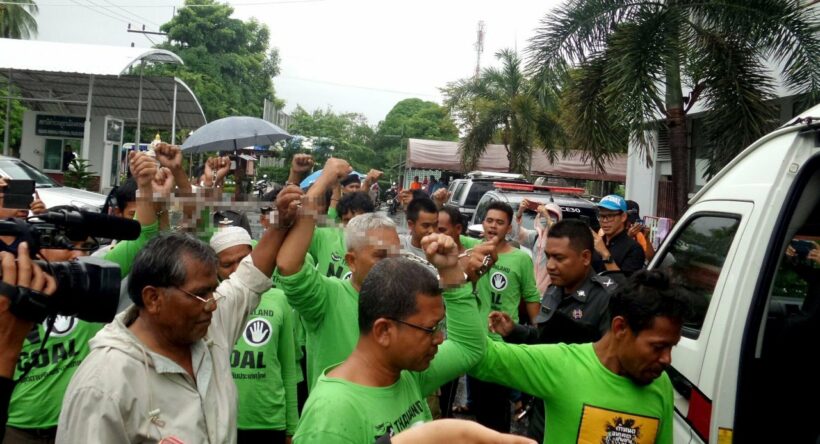 All 16 activists arrested on Tuesday for protesting against the planned Thepa coal-fired power plant face four charges and will remain in detention at Songkhla Provincial Court, unless they are granted bail.

Provincial Police Regional 9 acting commander Pol Lt-General Ronnasin Phusara disclosed that the 16 prominent anti-coal-fired power plant activists, who were currently in police custody, had been arrested on four charges after staging a protest without permission.

The four charges against them are: obstructing traffic; closing a road and exhibiting activities that may damage vehicles; fighting police officers or obstructing police duties; and taking weapons (wooden flag poles) into a public area.

Ronnasin said the police had to stop the protest because the demonstrators had not sought permission to stage such an event, hence the activity was illegal.

Meanwhile, all 16 arrested protesters were put in chains and transported to Songkhla Provincial Court to request bail in a bid to avoid detention at the court.

It was reported that some of those arrested had protested peacefully against the legal action being taken against them by sitting down in front of the courthouse.

Earlier on Tuesday, local people – including the 16 activists – opposing the Thepa coal-fired power plant project had tried to march to the location of the mobile Cabinet meeting, which was taking place at Rajamangala University of Technology Srivijaya in Songkhla’s Muang district, with the intention of meeting Prime Minister General Prayut Chan-o-cha and requesting reconsideration of the planned power plant and the second Songkhla seaport project.

In order to prevent them from reaching the Cabinet meeting venue, the police cracked down on the protesters and arrested 16 prominent members of the group, including the protest leader, Direk Hemnakhon.

In the light of pictures of police officers appearing to have beaten the protesters, Ronnasin insisted that it was merely a matter of how the images were portrayed and said the police had performed the operation based on official procedure and had already politely asked the protest leader to stop the demonstration before they were forced to take forceful action to break it up.

However, no charges of violating the Public Gathering Act had yet been made against the group of activists, nor had the prime minister issued any specific order in regard to how to deal with them following the protest, he added.

End of an era – Phuket FC dissolves under burden of debt