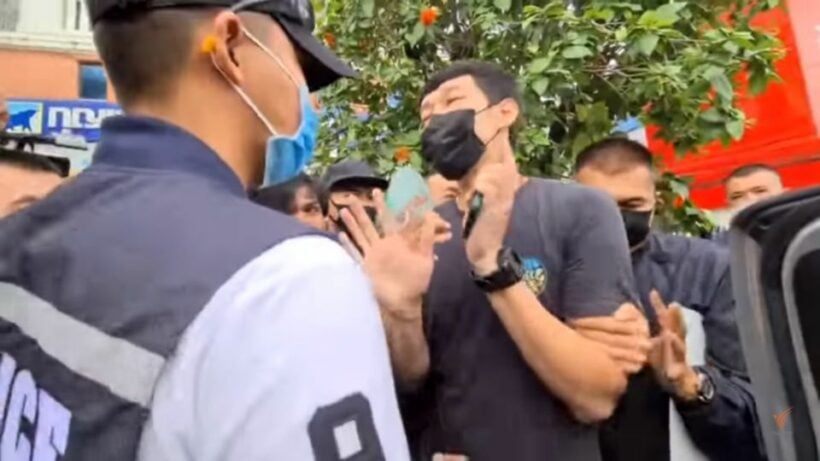 2 protesters have ended up with charges for violating Thailand’s emergency decree after trying to wave protest signs at a motorcade passing through Rayong yesterday. The signs were aimed at the Thai PM during his visit to the eastern province. Prayut was inspecting health measures in the wake of the controversy over mishandling of quarantine measures for a visiting Egyptian air crew.

Police say that the 2 men, named as Nutchanon Payakaphan and Panupong Jadnok, were arrested late yesterday for “failing to comply with police orders”. The pair say they did nothing wrong. They claim they were merely there to protest the Prayut administration’s handling of the coronavirus.

The two protesters were all ready to greet Prayut with signs reading… “The longer you stay, the longer the country is screwed-up” and “Don’t let your guard down, my ass.”

“I didn’t find my action to resist police functions. When I asked why they were taking me, they didn’t say anything. They took me into the car and left me without taking me into custody, so I walked out. How could that be seen as an escape?”

The activist have filed a complaint against the police officers who arrested them for “negligence and assault”. They’ve also submitted a petition to the House Committee on Human rights today.

Video shows both of the activists being manhandled away from the side of the road just minutes before the PM’s entourage arrived.

Panupong can be heard asking why he was being arrested as police physically dragged him away from view.

“Don’t touch me! Tell me first why are you arresting me? Are you trying to press charges?”

It emerged later that the pair had been dropped off a long way from the PM’s planned visit locations. They showed bruises to reporters, claiming they were subject to “police violence” during the arrest.

“Look at what the officers did to citizens.”

But police have weighed in saying that they were “performing their duties under the Disease Control Act” since the PM could be at “risk of infection from the protesters”. Police didn’t appear to show the same enthusiasm for protecting the PM from throngs of well-wishers who were waiting to greet the Thai leader.

“Officers were using their power under the Disease Control Act to order two men to disperse as part of the security operation for the PM.”

Whilst the two protesters were arrested, no legal action has yet been taken on anyone who was responsible for allowing the Egyptian air crew to wander around Rayong shopping centres whilst they were meant to be quarantined.