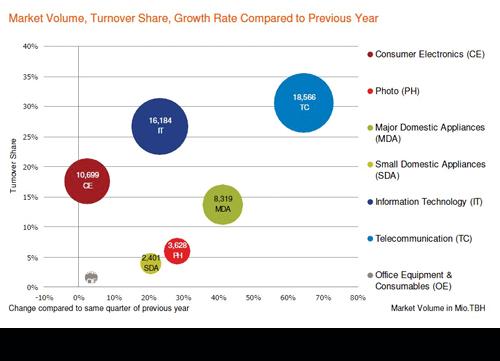 The strong growth of TCG, which includes everything from smart phones, cameras, washing machines and cooking appliances, to TVs, tablets, air coolers and office equipment, was highlighted in a recent survey and report conducted by GfK, one of the world’s largest research companies.

Out of seven TCG sectors tracked, Thailand’s largest two sectors were Telecommunications (TC) and Information Technology (IT), which registered 60.6 billion baht and 61.7bn baht in sales volume throughout 2012.

Out of these two sectors, strong performance was seen in the smart phone(+27% y-o-y) and media tablet (+70% y-o-y) segments.

The third largest sector in Thailand in terms of sales volume was Major Domestic Appliances (MDA), which saw 29.8bn baht in sales (+11.8% y-o-y). Notable segments in this sector were cooling and washing machines, which reported nearly 50% y-o-y sales growth.

Thailand’s photo sector (PH) also grew by 13.9% y-o-y, to just over 12bn baht in revenue. This is largely attributed to 150% annual growth in the interchangeable lens segment, which was driven by the increasingly popular mirrorless lens segment.

The Kingdom’s Small Domestic Appliances (SDA) sector grew by 9.2% y-o-y to 7.8bn baht. This was attributed to strong sales performance of food preparation appliances which garnered about 31% y-o-y growth.

Meanwhile, the Office Equipment and Consumables (OE) sector grew by 10.5% y-o-y to 4.1bn baht in sales.

Thailand’s growth exception was the Consumer Electronics (CE) sector, which although was the third largest sector in terms of overall sales volume, yielded a 5% y-o-y decline.

This sector – which includes the LCD TV segment, but not smart phones (TC) and media tablets (IT) – barely managed to maintain sales over 2011.

Total spending in Thailand’s CE sector was 41bn baht, with over half attributed to purchases of LCD TVs. This segment only grew by 2% over the previous year with sales slowing down in the second half of the year compared to the first.

Outperforming Thailand’s TCG market were the respective markets of Indonesia and Malaysia.

“Indonesia and Malaysia continue to reign as the top growth engines in the Southeast Asia region, driven by a strong adoption trend of the latest gadgets across both countries, particularly in Indonesia, where there is an ongoing phenomenon of households upgrading their major domestic appliances,” noted Stanley Kee, Managing Director for GfK in Southeast Asia.

“It is worth highlighting that the highest individual country growth registered for the Consumer Electronics, Major Domestic Appliances, and Information Technology sectors across the region in 2012, all hailed from Indonesia.”

Throughout the year, six of the seven sectors tracked in Indonesia, the fourth most populous country of the world, attained positive standings in the growth range of 2 to 31%.

Malaysia on the other hand, saw five panels expanding in values between 7 to 32%.

Much of this growth was attributed to its strong TC sector, which yielded nearly 8.4bn ringgits (79.9bn baht) in sales volume.

Meanwhile, nearly every one of Singapore’s TCG segments declined, with the exception of the TC sector, which saw a 44% y-o-y increase in sales volume to just over 1bn Singaporean dollars (23.7bn baht). Overall y-o-y growth of the island nation’s TCG market leveled out at only 0.4%.

Meanwhile, the TC sector continues to be the top driver of growth in Singapore (45%), Malaysia (32%) and Thailand (27%). Unrelenting demand for tablets have also propelled the IT sector to achieve good results in Indonesia (31%), Thailand (13%) and Malaysia (11%).

“In 2013, we predict the Telecommunications and IT sectors to continue to be key contributors to the good performance of the total technical consumer goods market, as manufacturers keep coming out with new enhancements to the popular smart gadgets that they know consumers love so much,” stated Kee.

“The [increasingly convenient] process of upgrading, and the latest innovations in the TV segment such as OLED and 4G TV, will also help stimulate matured TV markets to greater heights,” he concluded.