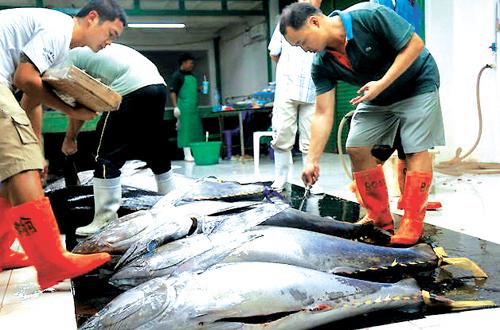 PHUKET: An investor from Singapore has expressed interest in expanding Phuket’s Tuna industry through the establishment of a new commercial longline fishing partnership with local operators.

Mr Yong Juang is one of a number of Singapore-based operators who have expressed interest in investing in the island’s tuna fishing industry, V/gov Somkiet said.

In early 2011, a Taiwanese delegation from the Singapore-headquartered firm, Seaspire, met with then-Phuket Governor Tri Aukaradacha to discuss plans to increase the firm’s Phuket-based fleet, to take advantage of a large migration of Tuna from Indonesian waters.

The initial plan was to move as much as 300 of the firm’s longliner vessels to port in Phuket, as initially reported by the Phuket Gazette.

However, according to the company’s Phuket website (click here), the firm currently lists only 50 longliner vessels based in Phuket.

According to the website, the firm catches, processes and exports tuna to Japan, the USA, China and South Korea.

Throughout 2012, there were an estimated 3,500 tonnes (3.5 million kilograms) of tuna caught off Phuket, which generated revenue of around 539 million baht, v/Gov Somkiet said.