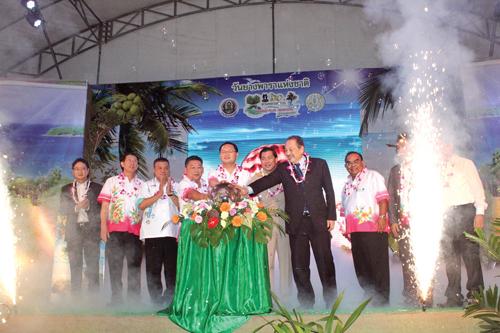 Organized by the Ministry of Agriculture and Cooperatives, the meeting was part of a private-public collaborative effort to create greater investment opportunities for the rubber industry, as well as to demonstrate Thailand’s readiness to continue to play an integral role in global rubber production and trade.

Deputy Minister of Agriculture and Cooperatives, Yuthapong Jarassathian, said that the meeting’s discussions focused on ways to develop the rubber industry and exchange research innovations in order to add value to rubber and rubber products.

“Thailand has great potential in rubber production because of its abundance in raw materials. Continued economic growth in Asia, especially in Japan and India, has led to greater demands for natural rubber and has boosted prices,” Mr Yuthapong said.

Thailand is now the world’s largest rubber producer and exporter, followed by Indonesia and Malaysia.

The rapid growth of the automotive industry is hoped to complement expansion in the rubber industry and related businesses.

Rubber exports are estimated to earn Thailand more than 400 billion baht annually; rubber production in Thailand accounts for one third of the global production.

The Board of Investment classifies the manufacturing of natural rubber and rubber products as a priority activity.

Eligible investment projects in the industry can receive benefits such as tax breaks and exemption from duties on imported machinery.

According to Damrong Jira-sutat, director general of the Agricultural Research Department, Thailand currently has a total of 17 million rai of rubber plantations.