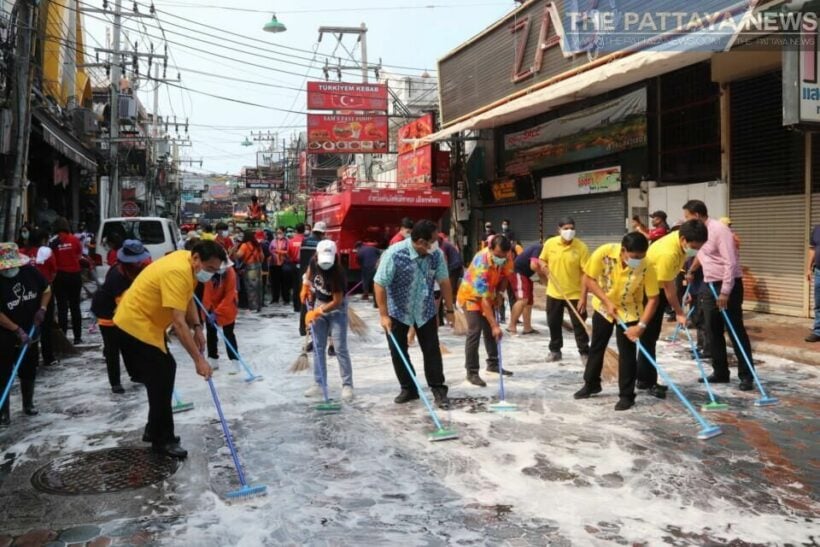 Without much other good news on the horizon, Pattaya officials have celebrated almost two weeks of no new Covid-19 infections with a celebratory ‘wash down’ of Walking Street. The ritual ‘wetting’, in the Songkran tradition, was seen as a new beginning, washing away the bad spirits and the bad times that had fallen on the once-busy red light district.

Sonthaya Khunplume, Pattaya’s Mayor, along with a platoon of city officials, local business owners and city workers, scrubbed the grotty pavements with plenty of suds for the camera as part of a wider make-over for the street that was proposed a year ago.

The ‘new beginning’ coincided with some good news for the battered tourist city.

Massage shops and spas as well as other ‘similar venues’ in Chon Buri were told yesterday that they will be allowed to reopen after being closed for nearly a month. The lifting of some of the provincial restrictions follows an intense few weeks of lobbying and letters to the Thai PM, begging for some relief of the not-quite-a-lockdown restrictions.

Yesterday’s Walking Street event symbolised a new beginning for the seaside party town’s businesses, well some of them anyway, and easing of restrictions since December 30 when any hopes of some ‘high season’ tourist traffic were dashed as the government designated Chon Buri, including Pattaya, as a high risk red zone, along with four other coastal provinces – Rayong, Chanthaburi, Trat and Samut Sakhon.

It’s also expected that a lack of new cases for nearly 2 weeks will provide enough impetus for the CCSA to lift remaining restrictions put in place on December 30, including the re-opening of bars and serving of alcohol.

Mayor Sonthaya says that the event symbolised a “fresh start as construction work to remove long standing eyesores of various electric and telecommunications cables on the street and move them underground is set to begin early next week”, according to The Pattaya News.

Whilst the celebratory mop up was held yesterday, it’s estimated that the infrastructure make-over will take up to 6 months and was delayed for almost a year at the request of business owners when proposed in better times before the Great Disruption set in when the Thai borders were closed in April 2020.

At a meeting of the CCSA today it is anticipated that Chon Buri’s red zone status may be reduced to an orange zone.