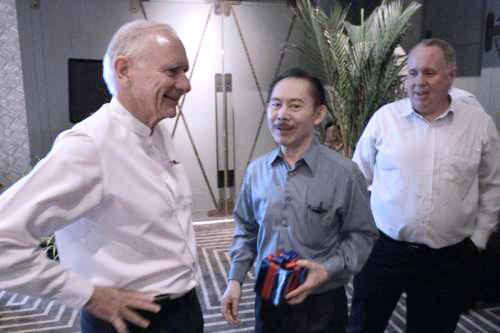 PHUKET: Change – experiencing it, realizing it, understanding it, anticipating it and then trying to figure out how best to implement it for the optimal benefit to Phuket and all of its stakeholders.

Such was the underlying theme of an awe-inspiring speech given last night by Wichit Na Ranong, a key driver, if not the father, of Phuket tourism.

Co-founder of the Phuket Tourist Association (PTA) and owner of the Indigo Pearl, the iconic five-star resort in the north of the island, Mr Wichit possesses a wealth of Phuket history and hindsight.

Representing stakeholders in Phuket’s tourism, property, hospitality and service sectors, the audience was captivated as the outspoken entrepreneur brought them back to a time when Phuket was far from the bustling tourism hub that we know today.

“The airfield’s runway back then was short, and it would take three hours to fly from Bangkok. Most people didn’t understand what tourism was, let alone its value or what it would mean for them and future generations,” he reminisced.

Eventually, a master tourism plan was drawn up, but despite a bloated drafting budget, the end result was far beyond the capacity of the central government to grasp it.

After a decade of painstaking lobbying efforts to convince the government to support and invest in critical tourism infrastructure, Mr Wichit and the PTA would eventually achieve a major milestone, and before long, small jet planes full of tourists were landing in Phuket twice a week – on Tuesdays and Thursdays, he recalls.

The rest is history. Just like that, drastic change had overcome Phuket, and with it, as it has continued to progress, have certainly come some daunting challenges that persist to this day.

To learn more about the history of Phuket as a global tourism destination and Mr Wichit’s views of it, past and current, pick up a copy of the September 14 edition of the Phuket Gazette, due out on Friday.