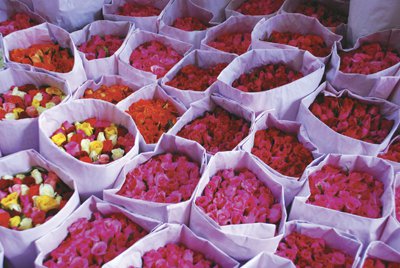 PHUKET: Red flowers are often symbolic, or associated with particular events or activities. Take the red rose, England’s national symbol. In the dynastic War of the Roses, the baronial armies of the House of Lancaster wore the red rose in battle against the white rose of York.

Bizarrely, that red or “damask” rose may well have been the first cultivated species in history. More universal is the red rose’s association with love and passion. “My love is like a red, red rose” the poet Robert Burns famously wrote.

Today this link is given expression on St Valentine’s Day, or helps to line the pockets of flower girls hawking roses to besotted farangs in the bars of Patong.

Sadly, the red poppy (papaver) has negative connotations: it is an emblem bloodshed and conflict; a symbol of the senseless blood-letting of World War One, when 10 million courageous souls perished in the fetid mud of Northern France.

Every November on Armistice Day, red poppies are still worn as a mark of remembrance. Ironically, these flowers still bloom every spring in Flanders, literally nourished for decades by the blood of the fallen.

While scarlet flowers lack these historic associations in Thailand, they want for nothing in terms of beauty. There are even roses, but even the world’s most popular flower is difficult to cultivate in these tropical climes.

The poppies here are more likely to be pink, produced not for their links with history, but because they are a centuries-old source of opium – and now heroin. Oddly, these poppies are innocently grown the world over as decorative perennials for the herbaceous border.

But the charm of tropical red shrubs is undeniable. One example is the Turk’s cap or wax mallow, (malvaviscus arboreus or chaaba rheum in Thai) which has previously avoided capture in these columns.

As the local name indicates, this South American native is a close relative of the hibiscus; a bushy, evergreen shrub with hairy, toothed foliage, and an explosion of large, bright scarlet flowers that are rolled as if about to open. They never do.

Usually held upright, one variety (penduliflorus) has pendant blooms. It is a strong grower and can easily become invasive if not pruned back. For this reason it is a good ‘starter’ plant for the new garden, provided it has a sunny spot and access to plenty of water.

Like so many hibiscus varieties, it is often attacked by leaf-eating or boring insects. As with all members of the family, it flowers freely and takes easily from woody cuttings.

Less common in these parts is the coral tree (erythrina speciosa or thong laang). More a small tree than a large shrub, this deciduous member of the leguminosae genus will reach 15 meters in height. Ideal for a garden with strong sun and limited supplies of water, its flowers appear at the same time as the leaves. In fact, blooming is more spectacular after a long dry spell, thus for much of the year the thorny branches carry no foliage.

The blooms are distinctively tubular, with brilliant red, upward pointing racemes, which are followed by elongated, bean-like pods.

Sometimes called the Tiger’s Claw on account of its unusually formed flowers, the plant is shapely and looks good as an ornamental in the garden, either with or without leaves and flowers.

Erythrinas constitute a huge genus; there are varieties native to Africa, Mexico and China. One grows in Hawaii where it is known as the Wiliwili tree.

The Wiliwili comes in a range of hues varying from white and green to the inevitable vivid red.

World-wide travellers, all erythrinas should do well in Phuket’s hospitable climate.

The greenhouse effect is the increase in global temperatures caused by the build-up of heat-trapping carbon dioxide (CO2) in the upper atmosphere, a process caused mainly by the burning of fossil fuels.

The only practical way in which this effect can be reversed is by regeneration and by planting. We can only effectively remove the CO2 by utilizing it. Plants offer the best way of doing this naturally.

As they grow, plants transpire: that is to say their porous leaves allow gases and moisture to escape into the atmosphere. Thus, not only do they prevent the build-up of too much water in the soil and thereby minimize the risk of flooding, they also allow the release of life-
enhancing oxygen.

In a small way, we as gardeners help this process of regeneration. Every green-leaved plant that we grow does its own little bit for the environment.