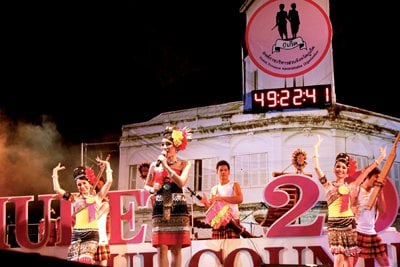 PHUKET: A number of large events held in Phuket during the final month of 2011 are expected to have generated as much as 370 million baht in revenue, government officials were told recently.

The news was announced at a meeting at Phuket Provincial Hall.

Chaired by Phuket Governor Tri Aukaradacha, the meeting was attended by representatives from various government departments.

Buayan Suwanmanee, Director of the Phuket Office of Tourism and Sports, lauded collaborative efforts between private and public sector groups in generating the income.

“We our pleased with the outcome of these events,” Mr Buayan said, going on to highlight Phuket’s money makers in December.

“Held from December 9 to 19 at the Krom Luang Chumphon Shrine at Saphan Hin, the event generated about 8mn baht,” he said.

Patong Carnival, held from December 15 to 20, generated 85 million baht and attracted about 20,000 tourists, he noted.

However, the largest event for the month – in terms of expected turnout and revenue generated – was the province’s New Year countdown festival, he added.

“Colorful Phuket Countdown 2012 was held from December 29 to 31. Our expected target was about 50,000 tourists, with target revenue of about 200 million baht,” he said.

Mr Buayan added that the OrBorJor’s Phuket Electronic Music and Dance Festival was also held in Karon on December 30 and 31.

He did not estimate how much revenue or tourists the event drew.

Phuket Island Investor: Always look on the brighter side of life