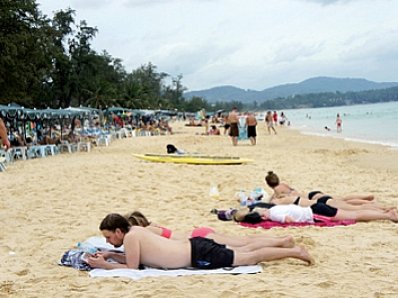 PHUKET: Occupancy rates at hotels along Phuket’s beaches have averaged more than 90 per cent during the current peak period and are expected to remain at or near capacity well into 2012, the Tourism Authority of Thailand (TAT) has announced.

Bangornrat Shinaprayoon, head of the TAT regional office in Phuket Town, said the island’s tourism sector is bustling not only because it is high season, but also thanks to an increased number of direct flights to Phuket launched last year.

Popular destinations such as Patong Beach, Karon Beach, Rawai Beach, Chalong Temple and Phromthep Cape have been packed with tourists in recent weeks, she noted.

Many hotels in Patong and Karon were turning away guests over the New Year period, despite a decline in arrivals from traditional source markets in Europe due to the financial situation there, she said.

“Domestic tourism is down overall because of the recent flooding crisis. Most of the Thais who did come to Phuket [in 2011] came to visit friends and family,” she said.

The decline in both Thai and European arrivals was more than offset by an increase in the number of visitors from the Middle East, India and other parts of Asia throughout 2011, she said.

She expects these markets to continue to perform well in 2012, even during the tourism low season that typically begins in May.

“If there are no problems, the tourism sector will continue to thrive in 2012. Besides the New Year celebrations, more Asian tourists will be arriving at the end of January to celebrate the Chinese New Year holiday,” she said.