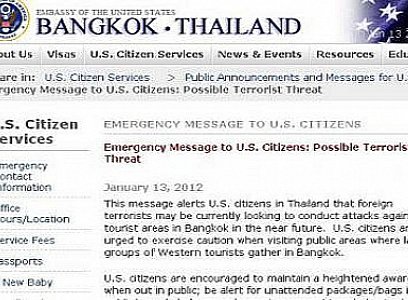 PHUKET: The US Embassy in Bangkok today issued an urgent alert for its citizens in Bangkok of possible terrorist attack.

The alert said foreign terrorists may be currently looking to conduct attacks against tourist areas in Bangkok in the near future.

US citizens are urged to exercise caution when visiting public areas where large groups of Western tourists gather in Bangkok.

US citizens are encouraged to maintain a heightened awareness when out in public; be alert for unattended packages/bags in public/crowded places and report any suspicious behavior to the nearest law enforcement personnel.

“We also encourage you to keep a low profile in public areas, particularly areas frequented by foreign tourists.”

For the latest security information, you should regularly monitor the Department’s Bureau of Consular Affairs Internet website, where current Worldwide Cautions, Travel Alerts, Travel Warnings and health-information resources can be found.