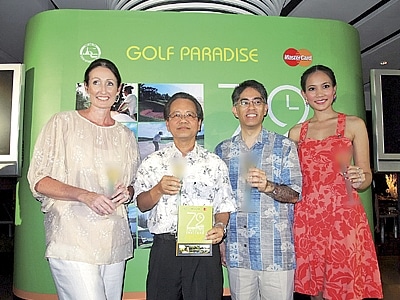 PHUKET: With the Thai summer just around the bend, club swingers are among the latest tourist group that the Tourism Authority of Thailand (TAT) has set its sights on.

In a bid to increase golf tourists to the country by 10%, TAT this year has partnered with MasterCard to launch the “72 Hours Amazing Thailand Golf Paradise” campaign.

All in, 86 golf courses in 20 provinces of Thailand’s five regions will participate in the scheme by offering special privileges to golfers who opt on paying with their MasterCard.

“TAT has partnered with MasterCard in various campaigns over the previous five years and all have been successful,” said Mr Sansern.

Previous campaigns that TAT and MasterCard have partnered in include the “72 Hours Amazing” destinations “& Beyond” series to promote tourism in Bangkok, Chiang Mai , Phuket, Pattaya, Hua Hin, Koh Samui, Khao Yai and Krabi.

“. . .Thailand has up to 250 standard golf courses, and the sport is growing in popularity among Thais and foreigners alike.

“Golfers who use their MasterCard will receive discounts of between 10 to 40% at the participating golf courses. We expect this to result in a 10% increase in golfers,” he said.

Mr Sansern said that golfer tourist groups comprise of groups from Asean and the greater Asian region including those from Korea, Japan, Singapore, Hong Kong and China.

For the complete list of all 84 participating golf courses, see thailand72hrsamazing.com.

New tourism and hotel college enrolls for May
In response to swelling demand in the island’s booming services industry, Thalang Technical College will be developing into the Phuket Hotel and Tourism College.

The move was announced by the college’s director, Suthep Yongyuth.

“This new development is in line with government policy to increase readiness of hotel and services personnel, as well as to produce diploma and advanced diplomas students that have skills consistent with the demand of industry operators.

“We aim to be a leader in the Asean region for applied academics, and to be a training hub for hotel and related fields for locals and non-locals alike,” he said.

The college will comprise six departments at the PorWorChor level: Hotel, Tourism, Economics, Business Computer, Spa and General Management. 50 per cent of the courses will be in English.

At the advanced diploma level, there are plans for five departments including Hotel and Services, Kitchen and Culinary Arts Management, Spa Management and Meeting and Seminars.

All of the subjects will be instructed in English, with the exception of Thai and other foreign language courses.

The remaining departments will open at a later date.

Phuket Business: Sansiri sales on the up