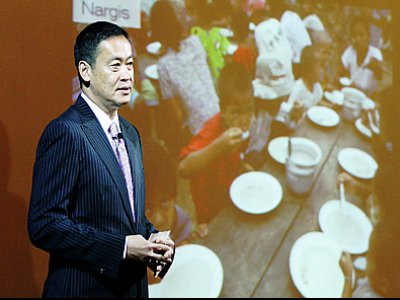 PHUKET: Amid an oversupplied and flooded real estate market, many new developers in Phuket are struggling to close project sales.

In contrast, Bangkok based mega developer Sansiri Plc has received promising feedback from buyers on the island.

In the five months since taking on Phuket, the Bangkok giant has invested nearly 2.7 billion baht (approx US$ 90 million) in four projects comprising a total of 1,697 new homes.

Complementing the instant sellout in October 2011 of the firm’s inaugural project in Kathu, the 556-unit ‘dCondo’ development, the 653 units in its second Kathu dCondo offering launched in January this year also sold out with unprecedented speed.

The impressive sales performance of Sansiri’s first two projects is a testament to the lingering demand in Phuket for premium branded, yet reasonably priced, properties.

Moving up a segment, Sansiri’s latest Phuket launch is Habitia, a two-story semi-detached, 244-unit development located just around the corner from the British International School in Koh Kaew.

Developed on 47 rai with three rai (4,800 sqm) of landscaped private park area, the 670 million baht project is looking to sell out in a timely fashion.

Half of the 244 semi-detached units (35 square wah or 140 sqm at 2.9 to 4mn baht) were sold within the first week since sales opened late last month.

Adjacent to Habitia is Sansiri’s final offering in Phuket for Q1: Habitown.

Targeting the lower-mid income bracket with offerings between 1.99 to 2.5mn baht, the 510mn baht project features 228 town homes sized at 84 sqm (21 square wah), and is scheduled to launch at the end of this month.

The project spans 27-rai, including two rai of park, a club house and a swimming pool.

The developer is anticipating the launch of 4 to 5 more projects before the year closes.

“We are looking into some land around Wichit Songkhram and the Mai Khao areas,” Sansiri President Srettha Thavisin told the Phuket Gazette.

In contrast to its initial projects in Phuket, which target mostly Thai income earners, a project in Mai Khao would be one of its first Phuket developments to target foreign clients, in addition to affluent Thais, he said.

Phuket Business: Krabi shaping up as an oil hub