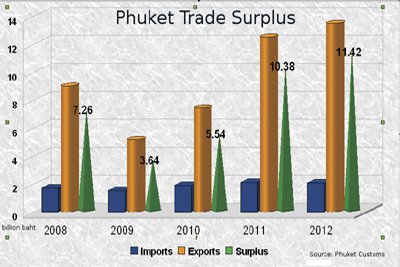 PHUKET: The Phuket Customs House reported another record-breaking year for international trade, with the island’s surplus of exports over imports in 2012 peaking at 11.4 billion baht, a 10% annual jump.

According to Phuket Customs’ receipts for the 2012 Thailand Government fiscal year (October 2011 – September 2012), the value of Phuket’s exports reached a new milestone of 13.5bn baht, up 8% from the previous year when exports were worth 12.5bn baht.

Meanwhile, imports to Phuket this year were worth just over 2.08bn baht, a slight decrease from last year when the tally of imports was 2.12bn baht.

Despite the slight decline in export value, the number of declarations increased with 960 entries submitted this year, up 11.2% from last year when 863 entries were submitted.

Unsurprisingly, block rubber dominated the island’s exports. The raw commodity comprised 69.98% of all of Phuket’s exports representing a combined value of 9.47bn baht.

Although exact-to-date data of the island’s imports was not available, it can be presumed from a previous 11-month report conducted last month, that top imports were chilled sea fish, (about 30% of the total), merchant ship freighters (28%), sports and leisure vessels (25%), frozen sea fish (12%) and boiler components (2%).

Aside from the milestones set in trade, Phuket Customs also reported having a record year in revenue from the collection of Value Added Tax (VAT) on sports and leisure vessels sold on the island.

The Customs House earned more than 31mn baht from the taxation of 48 boats throughout the 2012 fiscal year, a rise of an astounding 55% from the previous year when it collected 19.9mn baht from 31 boats.